First ten of the edition bound. Had to reprint after a printer/paper fiasco, and glad I did. Now to make more pastepapers and then back to sewing. Fun. 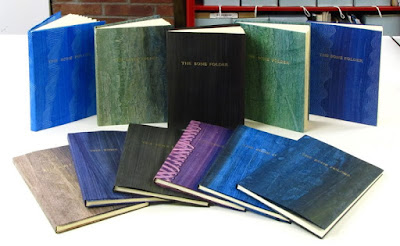 Posted by Peter D. Verheyen at 1:40 PM No comments:

About Collin and his "Pressbengel" (Introduction to 1st edition)

Note: The biographical information given in this introduction is undergoing serious revision to reflect all that was learned since spring 2013 and has been shared in posts to this blog. A new edition is in preparation, but for more about Ernst and his family read here.


Ernst Collin (1886 -1942) was a writer whose father, the well-known Berlin-based bookbinder Georg Collin (1851–1918), occasionally provided bookbinding lessons to Prince Heinrich, the brother of later Kaiser Wilhelm II, during the winters between 1873 and 1875. It was tradition in the royal family that all princes learn a trade. The elder Collin was also very involved in training women to become full-fledged bookbinders. Because of this paternal connection with the trade, Ernst maintained a strong affinity for bookbinding, demonstrated by his publications about and for the bookbinding trade. Among them are Vom guten Geschmack und von der Kunstbuchbinderei (1914), a treatise about aesthetics and fine binding included in a monograph about the Spamersche Buchbinderei, Leipzig; Deutsche Einbandkunst (1921), the catalog to the Jakob Krause Bund’s exhibition; and the Bund’s newsletter, Die Heftlade (1922–24). The Jakob-Krause-Bund, a precursor to Meister der Einbandkunst (MDE, the German association of masters of the art of binding) , included some of the most influential German binders of the late 19th and early 20th century, among them Paul Adam, Otto Dorfner, Paul Kersten, and Franz Weiße. Collin also authored Buchbinderei für den Hausbedarf ([1915]) and Paul Kersten (1925), the latter a biography of one of the most seminal German fine bookbinders, whose Der Exakte Bucheinband (1923) helped define German fine binding. A steadily growing "work-in-progress" bibliography of his writings can be found here - note, all are in German. Links to content online are included when available but may not be available in your country for DRM reasons.

Der Pressbengel (1922), Collin’s best-known work, was first republished in 1984 by the Mandragora Verlag and later translated into Italian as Dal  Rilegatore d’Arte (1996). Conceived as a dialogue between a bibliophile and a master bookbinder on all aspects of the bookbinding craft as well as specific techniques, the original German has a charming if somewhat pedantically formal “school primer” tone, in keeping with the time in which it was written. The question-and-answer format has long history in pedagogical texts, whether for catechisms (see Nicolaus Cusanus’ Christliche Zuchtschul) or trades, as in Friedrich Friese’s Ceremoniel der Buchbinder (1712), which introduces the reader to all aspects of the bookbinding trade and its traditions. First published in 1937, Oldrich Menhart’s Evening Conversations of the Booklover Rubricius and the Printer Tympanus is the letterpress equivalent to Collin’s Pressbengel, and there is considerable overlap between the two, as might be expected. Evening Conversations was later translated into German (1958) and then English (1980), the latter by the Crabgrass Press in an edition of 100 copies bound by Fritz Eberhardt

Throughout the work, Collin himself is very frank in addressing the conflicts between quality and cost, as well as the positive and negative impacts of “machines” throughout the work. In his introduction to the 1984 reprint of Der Pressbengel, Gustav Moessner, author of and contributor to several German bookbinding texts, states that he sees the Collin’s work in part as a reaction to the growing industrialization of the bookbinding trade and the loss of the skills and techniques connected with this industrialization. In many respects this trajectory continues today, accelerated by the decrease in formal bookbinding apprenticeship opportunities, the increasing simplification of structures, changing aesthetics, and ultimately changes in the perceived value of books and the general economic climate. Until recently, Germany’s strong guild system required one to complete a formal apprenticeship and become a master binder to order to open one’s own shop and train apprentices. Unfortunately, this system has been in decline over the past decades, and many shops are closing or no longer training apprentices – a completed apprenticeship and “meister” are no longer required to open a business if no apprentices are being trained. Concurrently, a network of centers and alternative programs, such as “master-run” shops offering instruction to amateurs, is not developing in a way that would provide the high quality, rigid training critical to sustaining the craft over the long term. The apprenticeship system declined even earlier in the United Kingdom, another nation with a strong tradition of formal craft training. In other countries the trade system was not as formalized to begin with. The United States represents the most diverse environment for the trade, with a blending of the dominant English, French, and German traditions brought over by immigrants, but a formal career path, like that in the European tradition, never developed. Instead, less formal apprenticeships (on-the-job training) became the norm. This did not, however, hinder the development of some very fine American binders.

Samuel Ellenport’s The Future of Hand-Bookbinding (1993) provides an excellent if sobering overview of the changes experienced by the hand bookbinding trade in the United States, but leaves out the explosive growth among amateur binders and book artists. The past thirty years have seen a resurgence of interest in all aspects of the book arts, with centers offering workshops springing up across the United States. Formal programs have been developed, including the North Bennett Street School in Boston (a two-year trade model), the American Academy of Bookbinding in Colorado (a series of workshops), and the University of Alabama’s MFA in the book arts (an academic degree). These programs are doing much to preserve many traditional skills, but the contemporary book arts craft risks losing others that may be deemed too anachronistic or, like gold tooling, simply unaffordable and therefore not regularly practiced.

This is the first publication of Der Pressbengel in English, and while I have attempted to remain faithful to the original text, it should not be considered a scholarly translation , nor was it ever intended to be a “technical manual.” Like the German original of 1922, it is intended to be a general introduction to the bookbinding craft and trade as it existed in Germany when the work appeared. The title change from Der Pressbengel, an esoteric tool used to increase the leverage when tightening a German backing press (Klotzpresse), to The Bone Folder, an iconic tool that represents bookbinding as no other can, was undertaken both because “Pressbengel” has no “clean” English equivalent and to help make the text more accessible to today’s binders and bibliophiles. In a very few other cases, references to brand names have been made more general where this had no impact on the essence of the text. The result, I hope, is in keeping with the spirit and essence of the original German.

To read (and or bind), select your download option at top left.

The print version of my translation is now back from the designer and looks great. Look forward to copying/printing and then binding 25 copies. A PDF of the text laid out in seven eight-page signatures will also be available for download. Want to wait until the original publication in the Guild of Book Workers Journal has happened. 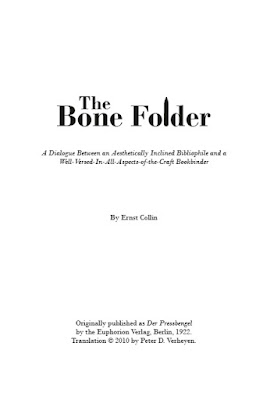 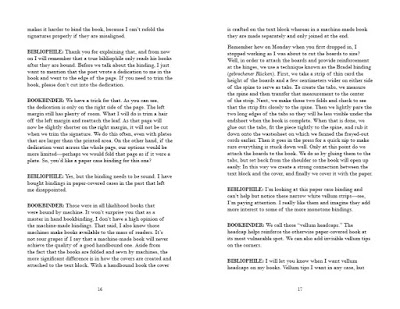 However........., did get busy to bind a prototype of the edition. Simple non-adhesive link stitch, with folded paper wrapper. Title stamped in gold. Each paper wrapper will be different - a nice way to use up papers and a great excuse to make more. 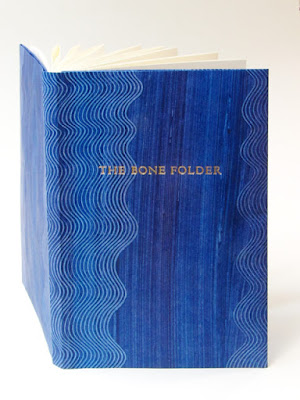 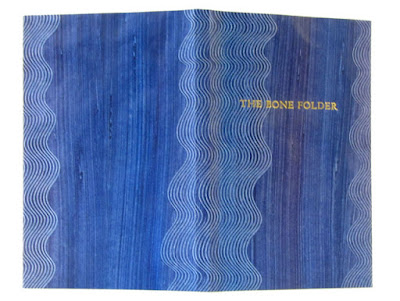