Now available on YouTube, the recording from today's lunchtime webinar. 109ish viewers while live, not bad. Actually a great turnout. Good questions in live feed as well. Regrettably those were not captured with the video. I did sort of repeat and respond to the questions in the recording though.

Enjoy, and please consider trying this yourself, as well as entering the Bind-O-Rama. The entry form is now online, deadline of June 30 to enter. Hope to see what you've made from fish skin. Early shares are showing a good number of happy nascent piscatorial binders.

Recently acquired a copy of Der Ewiger Jude (The Wandering Jew) illustrated with 12 woodcuts by Frans Masereel in a binding by the Düsseldorf binder Carl Schulze (1861-1937). The text is August Vermeylen's version, translated by Anton Kippenberg in the Insel Verlag's 1923 2nd edition. The story is a very old one, and "concerns a Jew who taunted Jesus on the way to the Crucifixion and was then cursed to walk the earth until the Second Coming. The exact nature of the wanderer's indiscretion varies in different versions of the tale, as do aspects of his character; sometimes he is said to be a shoemaker or other tradesman, while sometimes he is the doorman at the estate of Pontius Pilate." [From Wiki] A 2019 article in The Moment points to the anti-semetic nature of the story and how it has been reclaimed, also noting the importance of knowing "who is using the term and why?"

The binding has plain endpapers, a gilt top edge, stuck on woven endbands, and appears to be cased with false raised cords (kind of like Hermann Nitz's "Kombination" Binding, the ur-fancied-up book. I acquired the book a) because I LOVE the woodcuts of Frans Masereel, b) was struck by the decorated paper and binding (very much representative of the aesthetic of German binding of the day), and c) because it was "signed" by the binder.

From an article in the British Bookmaker, vol 2, nr 17, November 28, 1888, Schulze worked with Zaehnsdorf [as a journeyman] for several years. In 1904, the Archiv fur Buchbinderei reports him moving his bindery from Schadowstr 28 to Adlerstr 6. Google Street Views shows that no buildings from the time survived... The firm operated under the name of "Carl Schulze, kunstgewerbliche Werkstatt fur Lederplastik, Buchbinderei, und feinere Lederarbeiten." This is a range of services comparable on many levels to that of W. Collin in Berlin. Carl Schulze was not a member of the Jakob Krause Bund (1923), but the bindery was a member of the Meister der Einbandkunst (1927), with Carl spelled as Karl. The "C" is an artifact of French influences in the Rheinland. Paul Kersten in his Die Buchbinderei und das Zeichnen des Buchbinders... (1909) describes the bindery of Hendrick and Karl Schulze as representative of the new generation of creative and innovative bookbinders. 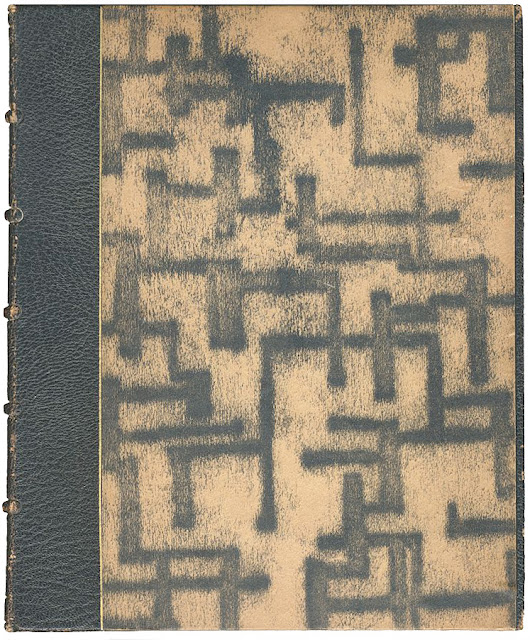 Email ThisBlogThis!Share to TwitterShare to FacebookShare to Pinterest
Labels: Buchbinder

Neighbor, "the fish monger's wife," continues to provide salmon skins, and never one to look a gift fish in the mouth, I graciously accept. As a bonus, she's gotten very good at skinning – less work for me." So, ...


Just got a text and neighbor will be dropping off another skin in the next day or so. Yippee!

Part of the reason I tried the Easter egg dye was that I was inspired by Amber Sandy, Anishinaabe and indigenous science advocate who has a terrific Instagram feed in which she describes how she tans skins of all kinds, also teaching at Reyerson University. A great resource! The dye was inspired by her mention of using fabric dye (Rit or Dylon). She also mentioned a great source for fish skins - sushi restaurants! Will definitely have to ask my favorite place, fingers crossed it survives this COVID19 world. Toronto area binders check it out, and perhaps catch a hands-on workshop / invite her to teach.