Received a copy of August Weichelt's Buntpapier-Fabrikation (3rd ed, 1927), and was elated to find a mention for Ernst Collin in the introduction that credited him with writing a new section on Java Art Papers (Java Kunstpapiere), also known as batik papers. In with Collin's section, this page of commercially made stenciled papers. 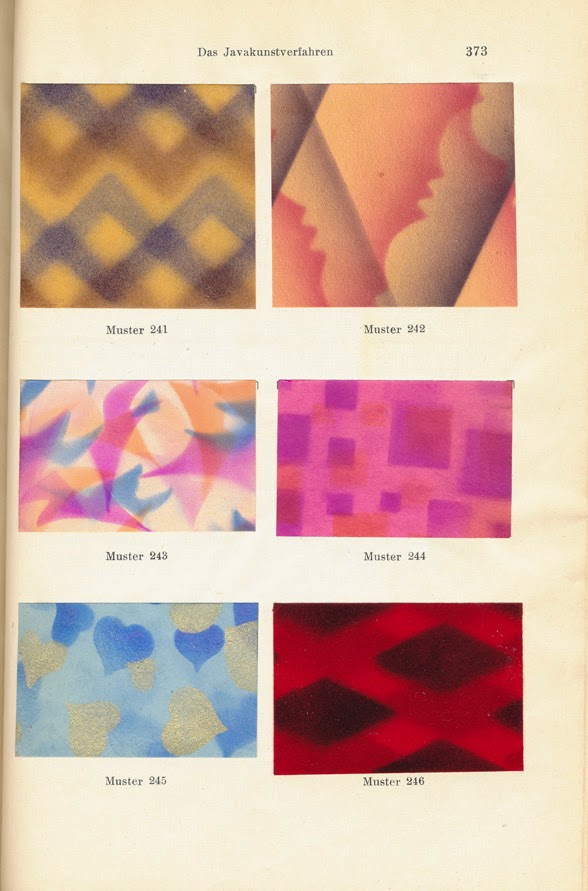 While Weichelt gives a nod to hand-made decorated papers, it is really about the industrial manufacture of these. As such, the book goes into many different printing processes, equipment, and similiar. It is richly illustrated with hundreds of tipped-in samples. The page above was not in the earlier editions. A digital version of the 2nd edition (1911) can be found online in the HathiTrust collections. Hathi version only available to those in US.

Posted by Peter D. Verheyen at 4:03 PM No comments:

Email ThisBlogThis!Share to TwitterShare to FacebookShare to Pinterest
Labels: Decorated papers, History of the Trade

Don Rash and his Boss Dog Press have just published the second title in a series of Eberhardtiana, the first having been 2003's Rules for Bookbinders. Rules is an "unfinished poem written in German and English before Fritz's death. The stanzas were lettered so that each stanza is presented in both languages on a page, separated by a sketch by Fritz." Sold out at the press, a copy is still available at Oak Knoll Books.

Three Lectures is a compilation of three lectures given by Fritz Eberhardt. The first, "On Binding" was delivered at the opening of Hand Bookbinding Today; An International Art, at Temple University in Philadelphia in 1978. The second, "Preserving the Materials of a Heritage" was given at a 1981 seminar. In it, Eberhardt talks about the book conservation challenges he and his wife faced after settling in the Philadelphia area in the mid-1950s. The third is "Bookbinding: The Craft, The Skill, The Trade, and The Art" given 1983 at the "Art and Craft of the Book: A Celebration" seminar held at Dickinson College.

Three Lectures  is printed on Frankfurt Laid paper in Linotype digital Aldus and Don Rash's own "experimental" blackletter font FritzGotische for the title and headings. The frontispiece was printed as a moku hanga woodblock print by Rash after a photograph in John & Mary's Journal by A. Pierce Bounds where the third lecture was originally published. The case binding is covered in a pastepaper with printed paper labels on spine and front board. An example of gediegene and zünftige (solid and befitting the craft/trade) bookbinding in the finest German tradition.
Fritz Eberhardt was born in Silesia (originally part of Germany; now part of Poland) in 1917, he suffered from polio at an early age, which resulted in a permanent limp. After an apprenticeship he studied bookbinding formally under Ignatz Wiemeler at the Leipzig Academy for Graphic Arts, and calligraphy under the prodigy Rudo Spemann, and later, in Offenbach, with Hermann Zapf. Following the end of the war, he walked out of the Russian occupied zone and into West Germany. There he met his future wife, Trudi Luffert, who was also a binder. In the early 1950s the Eberhardts came to Philadelphia, where he was employed by the Library Company. Within a few years they were able to move to the farm on Old Sumneytown Pike where they would cement their reputations as two of the ﬁnest American hand binders. In addition to his binding work, Eberhardt was internationally recognized for his calligraphy. Until his death in 1998, he was a continuing voice for the artistic and cultural value of bookbinding and book works, from his early dealings with the Philadelphia book world through the debates on standards and the beginnings of institutional book arts instruction, as well as a proponent of a more professional approach for our book arts organizations. Don Rash was among his most accomplished students. [From the Guild of Book Workers 100th Anniversary Exhibition Retrospective] Depicted is his binding on Felix Timmermans, Pieter Bruegel, 1950, featuring his signature hand-cut finishing tools.

Eberhardt was also the focus of an oral history recorded in 1993 by archivist Valerie Metzger that was published in the Guild of Book Workers' Journal, volume XXXVII, number 2, Fall 2002. This article is a must-read for those interested in the work of Eberhardt and the traditions and circumstances of bookbinding in Germany during the 1930s and 40s, but also for those working in the book arts. The introduction shared via the Guild listserv can be read here. Eberhardt was also the focus of an illustrated article "Binds That Time: Homage to a Master Bookbinder" by Tony Haverstick, published  in the June 1998 (vol 3, nr. 6) issue of the now defunct Biblio magazine. Here a link to his obituary from the Abbey Newsletter at CoOL. 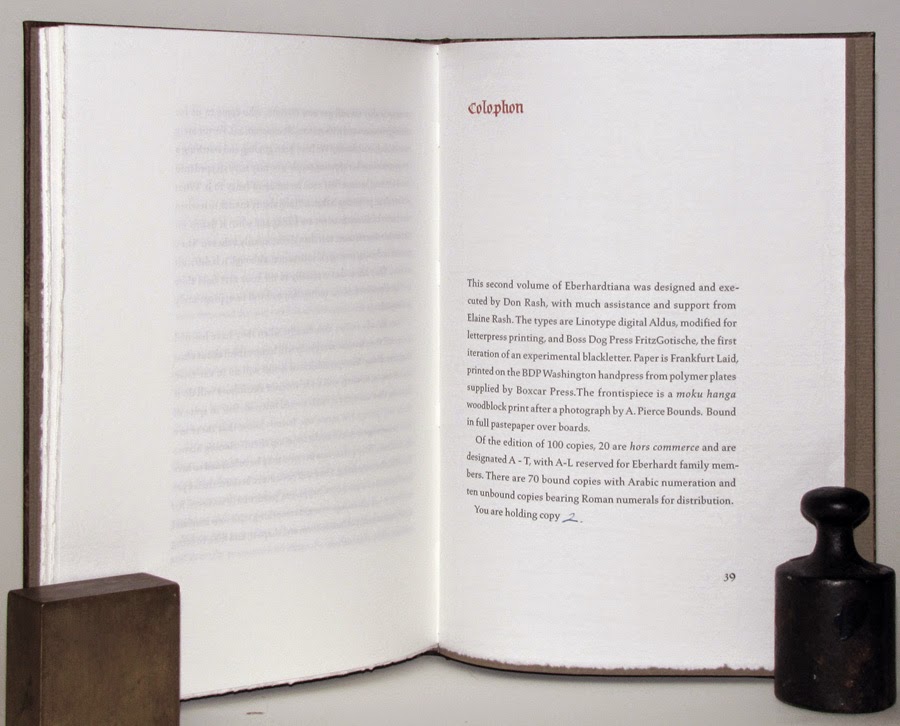 Don Rash's Eberhardtiana series pays very fitting homage to his Meister, and mentor, Fritz Eberhardt. These lectures are as relevant today as when they were given over 30 years ago, and touch on all aspects of the life of private practice bookbinders, book artists, and conservators.
Posted by Peter D. Verheyen at 3:49 PM No comments:

Back more intently to my Ernst Collin bibliography project, I've been finding more writings in new to me publications published both under his name and some of his pseudonyms (more about those in another post). During those searches I came across a title in Czech I had not seen before, even in WorldCat searches:

Google elegantly translates this as "Wrench: The book talks between the aesthetic bibliophile and bookbinder on the blade forged." Regardless. After further searches in WorldCat, located a total of two records, one at the Czech National Library, the other at the Bavarian State Library. The Deutsche Nationalbibliothek does not have a copy. I had also not seen it in Mejer (1925) or Mejer/Herbst (1933), Bibliographie der Buchbindereiliteratur.

However, Mejer did show two articles by him in Vetrinka, a Czechoslovakian periodical – "Rozhovor o polo francouzske vazbe" and "Rozhovor o vazbe knih." Both articles from 1923/24, but Mejer didn't provide a better citation. Any Czech spekers who can help with good translations of these titles please use the Comment form at bottom. Thank you.

Here the bibliographic information for the book.

Published as part of  series, it was nice to see that this was the first volume - very fitting.

I located a few copies in the Czech Republic, so using Google Translate I wrote to the dealer and asked if available... Book arrived about a week later, i.e. today. 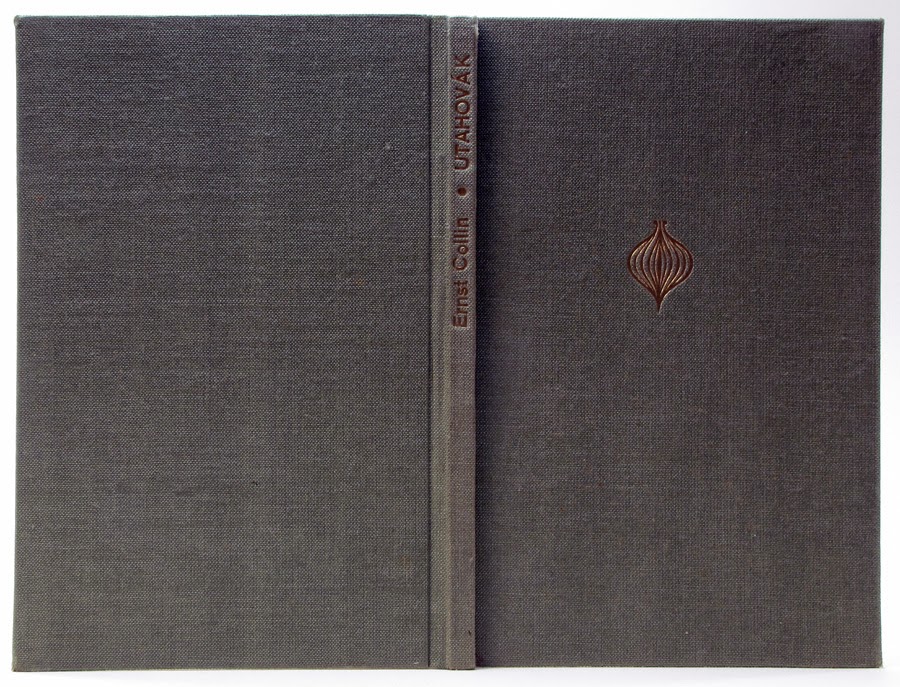 And here with its "siblings" including the 1922 original, various Mandragora German reprints, the Italian and my English translations, and other publications Collin was involved with. 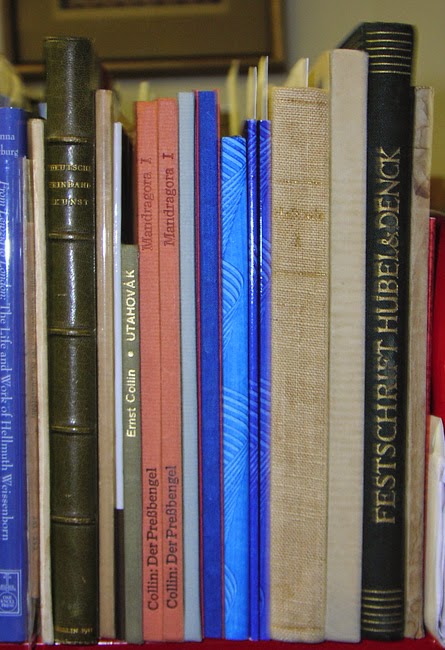