More cartoons out of the Falzbein, 1948. The Falzbein was the magazine for bookbinding apprentices, appearing as an insert in the Allgemeiner Anzeiger für Buchbindereien. It replaced the Buchbinderlehrling (1927-1943). All drawings by Jopf, except for the top one.

Posted by Peter D. Verheyen at 2:24 PM No comments:

There are very few mentions, never-mind articles about German bookbinders and bookbinding in English-language publications. Octave Uzanne's article "Paul Kersten's Decorative Leather Work," published in The Studio: an illustrated magazine of fine and applied art, is one of the few that I have found.


Wrote Octave Uzanne in his article:


The bindings of Mr. Paul Kersten, who has been established for a short time at Aschaffenbourg, and displayed some very fine examples of his work at the recent International Art Exhibition at Dresden, are the most striking manifestation yet made by the young German school of binding. He shines especially as a gilder. After a long course of work for a big firm at Leipzig, under the management of M. Sperling, for whom he did his earliest bindings, Paul Kersten was confident enough to start on his own account, in order to bring his name before the public and do justice to his signature.
[snip]
Having awarded full praise to the heavy leather covers of the bouquins of the seventeenth century, Mr. Kersten has to admit that the eighteenth century produced nothing but copies of French bindings; and, further, that if German bindings attracted any attention in the course of the nineteenth century, soon after 1840, it was solely due to the binders. Purgold and Trantz, men of German origin, living in Paris, and to Kalthoefer and Zaehnsdorff, who were established in London. As a matter of fact, try as one will, it is impossible to deny that Germany, during the centuries in question, was very poor as regards art binders, and this fact makes its recent efforts to achieve celebrity in this direction all the more meritorious. Mr. Paul Kersten had few predecessors, and when he talks of Trantz and Kalthoefer he must mistake the facts connected with these artists. They did no work "at home " - that is in Germany - but were "outsiders," who cannot be taken into account on the present occasion. Mr. Kersten himself is one of the foremost German exponents of his art, and he may without vanity be proud of the eminent position he holds.


The complete article can be read in The Studio: an illustrated magazine of fine and applied art, Vol 24, Nr. 104, 1902. The Studio was one of the premier arts & crafts journals.

Paul Kersten (1865 - 1943) was one of the seminal German fine bookbinders, and his Der Exakte Bucheinband (1923) helped define German fine binding. Ernst Collin wrote the biographical "Festschrift, Paul Kersten," of this in honor of this seminal binder's 60th birthday in 1925. It was published by Collin's Corvinus-Antiquariat E. Collin for the Jakob-Krauße-Bund. The publication is divided into 6 essays titled The Pioneer, Apprenticeship and Journeyman Years, The Author, The Artist, The Craftsman, and The Man. Also included are a bibliography of Kersten’s writings and illustrations of 48 bindings created between 1896 and 1925. Among them also a binding of Der Pressbengel. The illustrations were taken from Kersten’s Der exakte Bucheinband, and the Archiv für Buchbinderei, one of the premier arts & crafts bookbinding journals. Like Georg Collin with whom he worked at W. Collin, Kersten was heavily involved with teaching, including at the Lette Verein (a trade school specifically for women founded in 1866) where he succeeded Maria Lühr, Germany's first woman Meister. Other notable students included Otto Dorfner and Otto Pfaff, both of who Collin also wrote about in articles. 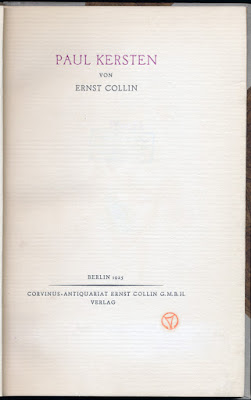 Below Kersten's Bundverzierungen, Spangen und Schliessen in moderner Richtung für die Vergoldepresse (1898), a sampler of dies available for embellishing raised bands and boards. While in German, the illustrations speak for themselves. Below, embedded text from HathiTrust.

Kersten was the author of numerous manuals for bookbinding, design, gilding, ... , however his Der exakte Bucheinband; der gute Halbfranzband, der künstlerische Ganzlederband, die Handvergoldung is considered the first manual for arts & crafts design binding. What makes the book especially interesting are the 133 depictions of bindings, technique, and design patterns, in addtion to 48 samples of decorated papers and other materials provided by various vendors at the back. Below, embedded text from HathiTrust.


Der exakte Bucheinband was also mentioned in Ernst Collin's Der Pressbengel (translated as The Bone Folder) when the Meister and Bibliophile were discussing board attachment. See "Aufschabeblech - What would it be called in English?", a post published back in 2011 for more information.
Posted by Peter D. Verheyen at 8:52 PM No comments: