Below a sample of Peka-Spritz-Papier made by Hübel & Denck in Leipzig from the article "Das Spritzverfahren in der Buchbinderei" by Paul Klein in the Buchbinderlehrling, 1928. I shared other papers using this technique by Hübel  & Denck from their Monatsblätter in this earlier post. 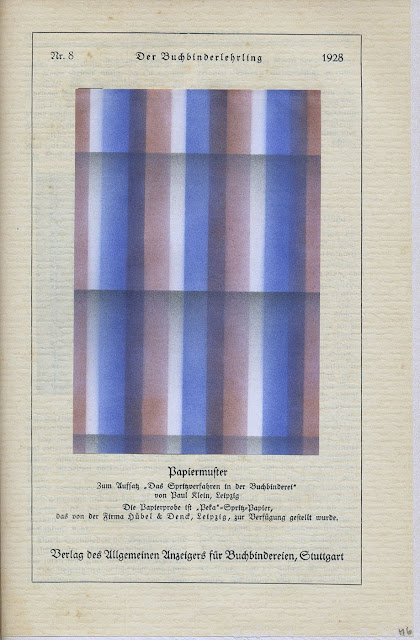 Steifbroschure (stiffened paper binding) by Amy Borezo on Ernst Collin's Bone Folder from the 2012 Bind-O-Rama, More examples including historical ones can be found by clicking on the steifbroschure label. Just scroll down.


Amy wrote a short post on how she made the paper for Bonefolder Extras here. The second edition text of Ernst Collin's Bone Folder can also be freely downloaded laid out for binding using the link in the left sidebar.
Posted by Peter D. Verheyen at 12:44 PM No comments: Links to this post

German binding manuals and related books of the first third of the 20th century often featured ideas and designs for bindings to instruct and to serve as a source of inspiration. For examples see Designing Spines and Paul Kersten's Decorative Leather Work.

Paul Kersten's (1865-1943) and Paul Klein's (1894-1968) Vierzig neuzeitliche Entwürfe für künstlerische Bucheinbände (Halle: Verlag Wilhelm Knapp, 1928) featured 20 designs each by two masters of the craft, noted teachers, and fine binders who both helped define design in the field. The "book" was issued in the form of plates printed on heavier newsprint-like paper in a wrapper. The table of contents indicated the finishing technique, e.g. blind or gold. The binding designs were printed on very thin glossy paper. The wrapper and layout were designed by Paul Klein. My copy of the text had been bound by attaching the (now rather brittle) plates to stubs and over-trimming the textblock. I'll blame the apprentice. A copy as issued (below) is/was available from my favorite dealer in Germany via eBay It is also available in facsimile.

Kersten who studied with Georg Collin (at W. Collin) was the teacher of  notable students including Otto Dorfner and Otto Pfaff, both of who Collin also wrote about in articles.others). He followed Maria Lühr as teacher at Lette Verein, and was recognized as one of the greatest finishers of his generation, and was the subject of a Festschrift written by Ernst Collin. In 1904, Kersten also published Moderne Entwürfe künstlerischer Bucheinbände, The book was serialized in 6 installments of loose plates, much like the book depicted below.

Paul Klein began his studies and apprenticeship at the Bauhaus (1921-22) under Dorfner where he led the binding workshop, and continued on with Dorfner as a journeyman after Dorfner left the Bauhaus. He later led the hand-binding division of Th. Knaur in Leipzig (a large firm) and subsequently went to work as a binder and designer at Hübel & Denck, also in Leipzig. According to Otto Dorfner: Zwischen van de Velde und Bauhaus (Halle/Weimar, 1989) edited by Mechtild Lobisch Kleins trail ends in the mid-thirties in Munich where he is said to have worked for a publisher.

More images from the book can be found via Europeana, here and here.

Below some actual bindings by Kersten and Klein from the Archiv für Buchbinderei, 1928.


Posted by Peter D. Verheyen at 1:39 PM No comments: Links to this post