I was both thrilled and petrified to have been asked to write an article about Ernst Collin for the historically Berlin-based Pirckheimer-Gesellschaft and its journal Marginalien. It was to be "grundlegend", a general introduction to Collin and his familial background. Thrilled because this is a tremendous opportunity to "reintroduce" Collin to German audiences and share the findings that I have shared here in a more formal way. Petrified, because it was definitely a huge lift for me to write in German at this level and for the journal it represents, in part because of some of the feedback I received for Die Collins (the German edition) – that anxiety was warranted. I was VERY thankful to a German friend and colleague at the University, and the editor of the Marginalien who coaxed me along and made me presentable. The article will appear in the next issue, 2021/2, Nr.241. 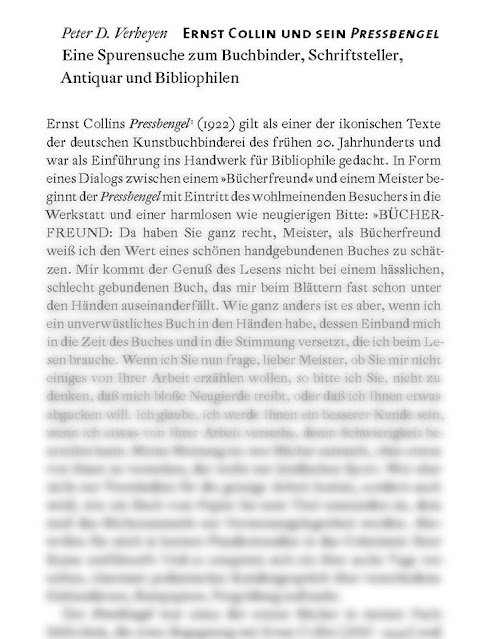 Recently, I was also able to acquire two more copies of the "regular" edition of the catalog to Deutsche Einbandkunst (1921) that was published by Ernst Collin. In addition to being the publisher, he had two short essays in the catalog (one uncredited). The wrappers of the "regular" edition were all made from decorated papers provided by several vendors. See the examples in my collection, and all the luscious advertising in the post. The exhibit also included 12 bindings by Georg Collin in the retrospective section. Georg Collin had died on December 24, 1918.

Now that the copyright wall is moving again, more articles by Ernst Collin, and about him and the Pressbengel have moved into the public domain to become accessible via HathiTrust. Among these a bibliophilic back and forth between a reviewer of the Pressbengel and Paul Kersten who defended the work. Today, this exchange might have happened on social media... There were also a number of advertisements for his Corvinus Antiquariate in the Zeitschrift für Bücherfreunde.

I also acquired a copy of the Festschrift  celebrating 50 years of the Buchbinder-Fachschule Berlin. This was the bookbinding trade school that was led by the bookbinding guild in Berlin. All other districts in Germany would have had an equivalent, either standalone, or as part of a more general trade school.

The Kunstklasse (Art class) at the Fachschule that Ernst Collin mentioned himself studying at under Paul Kersten and others in the article “Ein viertel Jahrhundert kunstbuchbinderischer Erziehung - 25 Jahre Berliner Kunstklasse“ (Archiv für Buchbinderei, Vol. 29, Nr. 9, 1929. (106-108)) was briefly mentioned in the Festschrift, but Kersten was not in the list of faculty past and current. Re-reading Collins article about a quarter century of the Kunstklasse I learned that it had been a part of the Guild's Fachschule, but that split off after 19 years in 1923. The Kunstklasse then moved to an arts & crafts school in Charlottenburg in the western part of Berlin. According to Collin, the split happened due to differences in pedagogy and philosophy, the Kunstklasse being there to free students from creative constraints, whereas the Guild's more rigid approach was geared to the requirements of the trade. Those differences were also apparent when I visited the Berufsschule (trade school) during my apprenticeship.

Back to the Collins, Georg Collin was listed as having taught there 1893-1896. An added item of interest was that the Festschrift was printed by Paetsch & Collin, the last firm the Collins, in this case Gertrud, were associated with. What was left of W. Collin was aryanized in 1939. Details to this relationship and the history of the firm under Gertrud have not been found. I was also very pleased that my copy of this little publication came from the collection of Werner Kiessig, the [East] Berlin based member of the Meister der Einbandkunst.

Finally, 3 more items for the collection, 2 bindings by W. Collin and the complete run of Die Heftlade, the journal Ernst Collin published for the Jakob-Krause-Bund (JKB). The W. Collin bindings include a full cloth publishers binding with another, new to me binder's stamp on the back, and a binding with leather relief, link above. 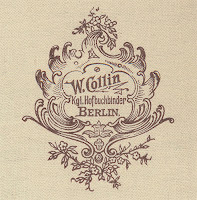 Posted by Peter D. Verheyen at 9:27 AM No comments:

Starting up is always an investment. If you're going to do good work, you really need a dedicated space that meets your needs. So, after my return from my apprenticeship in Germany and the School for Book Conservation in Ascona (read about my "path" starting here), my father and I built a bench in two parts with storage and other features. We got my set-up this going as quickly as I could to keep my bench skills up and earn some $$ while looking for a job as a conservator. VERY important to work with others at this early career stage for professional development and mentoring. Then, of course, I needed supplies, some equipment, ... My father, as was his habit, kept track and made sure I did as well. While the dollar amount is no longer available, I recently rediscovered this pie-chart he made to remind me.

Set-up was for bench and equipment like vacuum pump and home built suction box; travel for the MARC train from Baltimore to DC and Bookmakers, then owned by Gus Valetri. That was in a tiny office space in an old DC office building; subscriptions were Designer Bookbinders, Institute of Paper Conservation, IADA's Maltechnik-Restauro, Abbey Newsletter, Guild of Book Workers, ...; books, well you can never have enough of them, but I started small (and enjoyed the 40% discount from working at the campus bookshop part-time); photo documentation equipment; supplies included papers, board, leather, dyes/pigments, hand tools.

Here, the 2-part bench with flat files and storage on one side, light table / paring surface on the other half. I still use the benches and presses... The press on the bench served as the model for the Arnold Grummer Quiknip, a great press for those starting out that will give a lifetime of service. The flexibility to break the benches down in their component parts made it easy to modify (read bring them down to a more normal desk height) due to changes in mobility..., something I describe in Bookbinding and Adapting to Life Changes.

I still keep track of expenses and income, but it would not be prudent to tally all that up, especially for the books...

Email ThisBlogThis!Share to TwitterShare to FacebookShare to Pinterest
Labels: Verheyen

Ernst Collin edited and published Deutsche Einbandkunst, the catalog for the Jakob Krauße Bund's (J-K-B) exhibition that was held in the Weißer Saal of Berlin’s Schloßmuseum September-October 1921. The catalog featured essays by Ernst (2), Paul Kersten (2), G.A.E. Bogeng, and others. Ernst’s essays were “Wer ist ein Bücherfreund” (“Who is a Bibliophile”) and the uncredited “Über Bucheinbände” (“About Bookbindings”) describing the various structures hand bookbinders applied and what viewers would encounter in the exhibit. Other essays provide context to the J-K-B of which Kersten was director and other aspects of the exhibit such as bindings by Jakob Krauße drawn from various libraries. Displayed bindings are minimally described in the checklist that is divided into several parts: Deceased members Georg Collin (12), Eduard Ludwig (15), Fritz Nitsch (1) and active members including Otto Dorfer (24), Paul Kersten (42), Otto Pfaff (14), and Hugo Wagner (12). In total, there were several hundred bindings and other works. The catalog also contains forty pages of advertisements for antiquarians and booksellers, binderies, printers, and purveyors to the trade. Ernst wrote several articles about this exhibition in other publications for the book trades and general public.

The catalog was produced in two versions, a deluxe of twenty unbound copies on handmade wove rag (IXX), with the remaining copies (21-2,000) on a machine-made wove rag paper. My copy of the deluxe edition (Nr. XX) was bound in an unsigned ¼ leather binding with cloth sides and gilt top edge.

Of interest is that the decorated wrappers for the regular edition were made by ten different decorated paper makers. Below some examples

I was recently able to acquire two more copies of the catalog with different decorated papers for the wrappers.

Below, all advertisers in the catalog. In addition to some of the exhibitors, the advertisers included booksellers, publishers, hand- and large trade binderies, and suppliers of all sorts. Download from here.

Posted by Peter D. Verheyen at 1:21 PM No comments: