Sushi and a Philosophy of Craft

One of the terms often referred to is "shokunin" a term that loosely translates to "artisan" but means so much more. The Kyoto Journal has an interesting article, "Shokunin and Devotion" that is definitely worth reading. As the master woodworker Tasio Odate said:

The Japanese word shokunin is defined by both Japanese and Japanese-English dictionaries as "craftsman’ or ‘artisan," but such a literal description does not fully express the deeper meaning. The Japanese apprentice is taught that shokunin means not only having technical skills, but also implies an attitude and social consciousness. … The shokunin has a social obligation to work his/her best for the general welfare of the people. This obligation is both spiritual and material, in that no matter what it is, the shokunin’s responsibility is to fulfill the requirement.

In the clip below Jiro Ono lays his philosophy out: Once you decide on your occupation, you must immerse yourself in your work. You have to fall in love with your work. Never complain about our job. You must dedicate your life to mastering your skill. That's the secret of success and is the key to being regarded honorably.

In a word, fantastic, sobering, inspiring, ... You'll also be extremely hungry during and after, and unless very lucky, highly unlikely to ever experience, especially since reservations must be made at least a year in advance...


The film is available on Hulu and Netflix, as well as YouTube.

Definitely worth watching!
Posted by Peter D. Verheyen at 10:08 AM 2 comments:

Email ThisBlogThis!Share to TwitterShare to FacebookShare to Pinterest
Labels: apprenticeship

Fritz Otto's latest adventure. As usual, he only gets to do the dirty, thankless tasks, never the whole thing. At least the eatin' was good...

See where one of the skin halves was used on a binding.

The Hard Life of a Pressbengel

Translation of "Der Pressbengel," from Der Buchbinderlehrling, vol, 13, nr, 11, 1940.
By Schlaghammer (beating hammer), pseudonym for Franz Weisse.
For more about Weisse, see also the bottom of his story about a bone folder.


Once upon a time, there was Pressbengel that was very busy during the day, so busy that the Journeyman threw it into a corner with a groan from all the effort and left it there until the next morning. The Pressbengel sensed that the Journeyman felt it had become an outdated piece of bindery furniture, and that it was easier and more comfortable to use a tabletop iron press rather than the traditional hand press. Add to this that the Journeyman wanted to go to a party that night, and who knew if he would even be fit to work the next morning. The nature of his situation depressed the Pressbengel to no end, and it began to brood about its role in, and importance for the bindery.


Didn’t the Journeymen, as well as an otherwise gentle young lady, break and glue it back together three times in their zeal to tightly back their books? Yes, they did! No one, whether apprentice or Meister gave the Pressbengel, and the pain they inflicted on it, a second thought. They all treated it pitifully, such as when the apprentices didn’t lubricate the wooden threads of the press with dry soap so that its job would be easier than on the rough, dry wood that wouldn’t allow the nut to turn. Then the louts would just bang on it with a hammer until it broke. The Meister was too cheap to buy a new one, choosing instead to just glue it back together until the next time. After flying across the shop, the Pressbengel finally had enough, and came up with a prank that he was going to play on the Journeyman.


Early the next morning, after the Journeyman had finally collapsed into his bed after the night of debauchery and drinking, the Pressbengel came up to him and hit him, first in the gut, then the chest, and finally on the head, repeatedly. The Journeyman twisted and turned, but try as he may, he could not avoid the repeated blows to his brow. “I’ll teach you, you vile Journeyman, to abuse me! For ten years I’ve served you and the others, and it’s been 30 years since the Meister bought me. Millions of presses I’ve tightened for you! And, this is how you thank me?!? Just you wait! Payback is coming.

The Journeyman avoided the bindery for eight days on account of the horrible headache induced by his “dream.” His first glance was towards the corner that he had tossed the Pressbengel into in anger. The Pressbengel, however, did its duty in the Meister’s hands, squealing in delight at the sight of the pathetic looking Journeyman – “see there are still lots of tasks in bookbinding that handpresses are essential for! When in your hands, I, ‘Herr Pressbengel,’ help you tighten those screws. Me, ‘Herr Pressbengel to you!’ Your bindings would be junk if you didn’t have me! Hand bound books are supposed to be solid as a piece of wood, and without me they would be floppy and unsightly lumps. So, Herr Journeyman, won't you treat me better? If not, I’ll visit you again in the middle of the night, but this time along with someone who’ll beat some real sense into you, the beating hammer!"

Email ThisBlogThis!Share to TwitterShare to FacebookShare to Pinterest
Labels: Franz Weiße, History of the Trade, Tools

Book and Paper Arts for School Students, a tale of two Pralles

Given the date of publication and the torn-out title page in my copy, I'm going to assume that it contained information linking it to the National Socialist government... Per the OCLC record, it was published for the Gauwaltg. d. NS.-Lehrerbundes im Gau Weser-Ems (Administration of the NS Teacher's Federation in the Weser-Ems District) that was based in Oldenburg.

The book would have been used in the teaching of paper and book-related crafts to/by teachers working with the lower school grades.

Interestingly, a Heinrich Pralle taught this subject at the Staatliche Kunstgewerbeschule zu Hamburg where Franz Weisse and Ignatz Wiemeler also taught. The book Die staatliche Kunstgewerbeschule zu Hamburg (1913) shows examples of works created by Pralle's students starting page 383. Given the similarity in name and focus, were they father and son?


The purpose of this instruction (in German) was to get children used to working with their hands, something that privileged those in rural areas over the cities because the children were more likely to have direct contact with this kind of work. From Die staatliche Kunstgewerbeschule zu Hamburg, "The pupil's workshops should not train craftsmen, they should educate in the children of all professions in the right understanding, sharp vision, and aptitude. Manual dexterity is valuable if mind and body are to be cultivated."

Willi Pralle's book introduces the topic in the same manner with specific instructions for a number of excercises... A similar book is So fertige ich allerlei Buchbinderarbeiten (1911) by Richard Parthum. 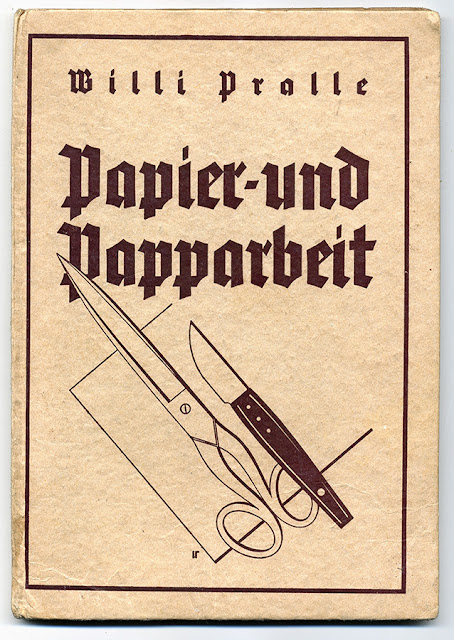 Posted by Peter D. Verheyen at 2:55 PM No comments:

I'm continuing to go through my old trade manuals and journals scanning the materials swatches that were so often included. This time the swatches are from "L. Brade's Illustriertes Buchbinderbuch," edited and reworked by Paul Kersten in 1921. The closest edition available in Hathitrust is from 1916, but is lacking the materials samples and advertising. 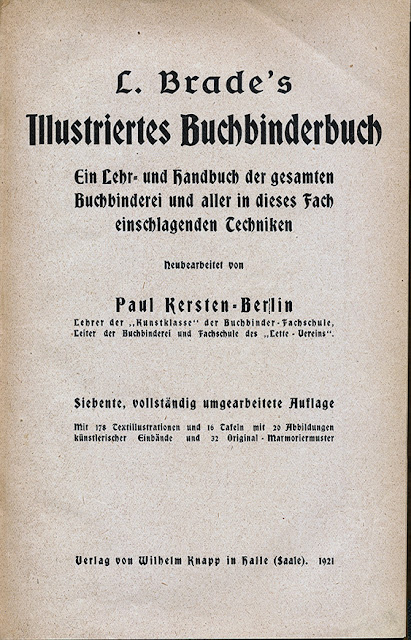 Posted by Peter D. Verheyen at 9:05 AM No comments:

I've long been enamored with the work of David Bourbeau, and had to jump at the chance to acquire this design idea for a binding on Barry Moser's Pennyroyal Press edition of the Wizard of Oz dated 6.6.'04. Sadly, he was never able to execute the binding as he passed 8/22/2009. Barbara Blumenthal wrote a wonderful "in memoriam" for him in The Bonefolder, vol. 6, nr. 1, fall 2009. From the "in memoriam:"

He was introduced to the art of the book by Leonard Baskin, and in 1972 he sold his business and took a two-year apprenticeship with master bookbinder [and Wiemeler student] Arno Werner. In 1975 he established the Thistle Bindery, located at various times in Northampton, Easthampton, and Florence, and in 1977 he took on the first of his many students and apprentices.

A consummate bookbinder, he designed and constructed strong, innovative bindings for fine press books while also working in book restoration and art conservation. Having coined the word “bibliotect,” or book-architect, he observed that a binding “is not merely a fancy cover, the facade, but all of the elements, seen and unseen, that form the foundation and structure of the book.” This is borne out in his many organically unified editions, among them Poe’s The Raven, with graceful wing-like forms emerging from a raven-black binding, and Robert Francis’s posthumous collection Late Fire, Late Snow, whose handmade paper cover contains gold-tooled lines representing the shape of the title poem. Both of these books were bound using fine papers, a bookbinding material championed by David.

His design for The Wizard of Oz would have been executed similarly, except instead of being full paper it would have had a black Niger goat spine and fore-edge trim with the design being executed as a paste paper. The titled would have been tooled from the title page using "gold dots within the emerald light opening  in the black clouds."


Below Bourbeau's concept for the cover design using a unique paste paper. As in the case of the Raven, a design binding need not be full leather or vellum. 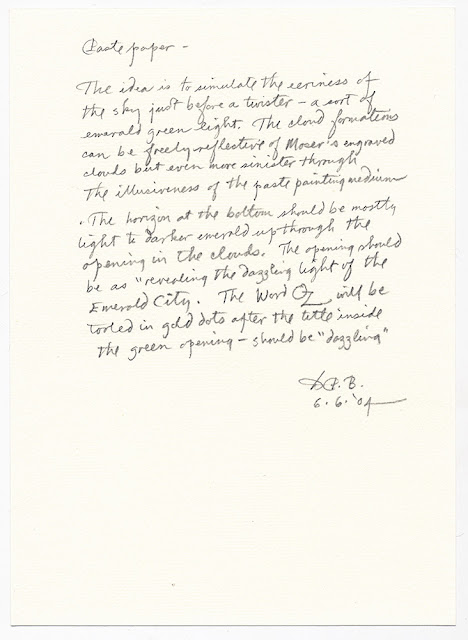 As an aside, a copy of Bourbeau's The Raven that was bound in an edition of 100 copies for sale (125 total) is available from The Veatchs Arts of the Books. It is on my bucket list.

So, how do you approach the design of your bindings?