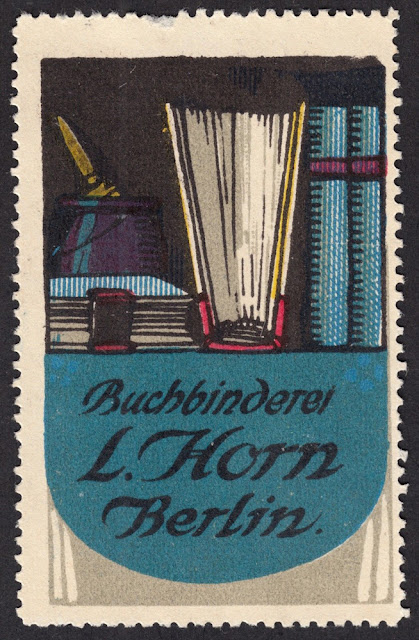 Schauen wir mal ob es über die was zu lernen gibt...
Let's see if we can learn anything about them...
Posted by Peter D. Verheyen at 10:03 AM No comments:

Learned on Friday that Norma Rubovits passed away at the age of 97 1/2. Bill Drendel wrote a wonderful tribute to her that was posted on Book_Arts-L, Bill Minter shared images from a 2010 exhibition of her work at the Newberry, and I found myself remembering her from my days in Chicago. Norma was a regular participant at Chicago Hand Bookbinders meetings, which is how I came to know her during the late 1980s – early 1990s. Fast forward to 2006, and I was very glad to have included her in the retrospective exhibition held for the Guild of Book Workers' 100th anniversary where one of her vignettes was shown.


The passing of Norma B. Rubovits

The book arts community lost a good friend this week Wednesday, when Norma B. Rubovits died at the age of 97. She was a pioneering paper marbler, imaginative bookbinder, major collector and donor. For decades from the 1960s well into the current century, she had a role to play in Chicago book arts and at the Newberry Library. The Newberry hosted a retrospective exhibition of her work in 2010 that celebrated her international renown.

Norma's story is one of determined craft, original thinking, and careful collecting, but it started almost by chance. One day in 1964, Norma's husband Frank asked her if she wanted to take a binding class with him. He had inherited a collection of deteriorating books from his grandfather’s library. Norma said "Why not?" and off they went - to study with Elizabeth Kner, a well- known Hungarian émigré binder with a studio in the Printer's Row area of Chicago. Although Norma became an accomplished binder, her attention soon turned to marbled papers. She taught herself to make marbled paper, by referring to old manuals and sample books at the Newberry, and also by seeking out and getting to know others interested in the art. Her papers were accomplished enough that Jim Wells bought some for use in the Newberry Library bindery, and other customers lined up too. But Norma was not content to produce sheet after sheet of beautiful but predictable papers. She started experimenting with smaller marbles that took up only part of a sheet and eventually came to place these compositions toward the center, using the sheet as a sort of frame. She first referred to these as marbled "doodles" and later "mono-prints," but finally settled on "vignettes." The marbling world had never seen anything like them, and they caused a stir. The Chicago Public Library included her prominently in an exhibit in 1969. She got invitations to exhibit her papers and bindings in group shows locally, nationally, and internationally. She visited Turkey, then as now a center of the marbling world, and corresponded with marblers everywhere. Her international reputation was further solidified in 1992 when Dawson's Bookshop in Los Angeles issued Marbled Vignettes, a limited edition of original miniature marbles along with an accompanying interview in which Norma described her methods and aesthetic.

From the start, Norma Rubovits collected everything she could find on the art of marbling, including copies of the rare manuals she had seen at the Newberry and hundreds of other works about paper, binding, and related book arts. She built a huge collection of papers made by others, largely by purchasing or trading some of her sheets for some of theirs. She often told the story of how shocked and pleased she was when Newberry’s curator, James Wells expressed interest in keeping her papers as part of the John. M. Wing Foundation. But Wells retired soon after and he referred her to "the new guy," Paul Gehl. Norma's major gifts to the Newberry began in 1991 and continued for over a decade. As recently as last year she was adding individual papers and books. The collection is always growing in other ways too. Marblers and authors on paper continue to send their work to the Newberry in Norma's honor. Norma also endowed a book fund at the Newberry for the purchase of books on binding and decorated papers. The collection now numbers more than 4000 marbled pieces and more than 170 books, including many of Norma's own bindings.

Many will mourn Norma as artist and friend. Born Norma Bloch on August 26, 1918 in Tulsa, Oklahoma, she graduated from the University of Oklahoma and came to Chicago to work at the University of Chicago hospitals as a dietitian. It was during this time she met Dr. Frank E. Rubovits, an obstetrician-gynecologist from an established Chicago family. They raised two daughters: Paula, an artist and model, and Randi, a psychiatrist. Frank died in 1987, Paula in 1988. Norma died March 16, 2016. Randi Rubovits-Seitz is the sole immediate survivor. A memorial is being planned.

Link here to an in memoriam from the Newberry Library, and more about Norma and her collection and more. Here from the Chicago Tribune.

Below three of her marbled vignettes that she sent to me, shown approximately actual size. I was very glad to find them again.

Though we lost touch over the years, she is someone who I will always remember very fondly.

Thank you, Norma. You are missed.

Posted by Peter D. Verheyen at 1:24 PM No comments:

Out of the Buchbinderlehrling, Vol 7, 1937 – Tool sets for apprentices in their first year, more advanced apprentices and unskilled laborers, as well as journeymen and masters.

Posted by Peter D. Verheyen at 7:22 PM No comments:

Found in the Deutsche Digitale Bibliothek and in the collections of the University Library at Würzburg – the exlibris of W. Collin, designed by the artist Hermann Hirzel, 1899. Hirzel was Swiss and studied at the Kunstakademie Berlin where Georg Collin also studied at about the same time. He died in Berlin in 1939. It is possible that this exlibris was exhibited at the 1900 World's Fair in Paris.

Below an article about that starts at bottom-right of the page and continues on next pages.

Posted by Peter D. Verheyen at 5:22 PM No comments: 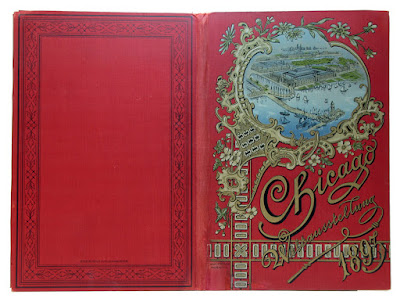 Portfolio with 32 loose plates from photographs of the pavilions and other sites. Interesting is that the descriptions for these also include the construction costs.
Author: Wilde, Otto u. Albert Ganzlin (ed)
Description: Portfolio by W.Collin, Königl. Hofbuchbinderei Berlin. Signed at bottom of rear cover.