Lots of books have need for indexing tabs, books such as directories, address books, and ledgers. The marks for the index are placed along the fore-edge of the book. These can be half-round cuts called "thumb indexes" like those found on many dictionaries, or they can be strips of decreasing length that are cut out of the fore-edge. It is the latter I will show here.

Mary Sullivan of Crowing Hens Bindery in Nashville, TN reached out to me about this topic and provided the beautiful images of her German-style indexing shears and an image of the one described in Wm Atkins Account Book Binding - A Classic Article on Folding, Sewing, Equipment,..., pg 33. Note: This is text is available as Print on Demand and is excerpted from The Art and Practice of Printing by John Mason, edited by Wm. Atkins. Mary, by the way makes beautiful springback bindings. Check them out on her website. They open flat and are great for writing in.

Here is an image of shears, including the Registerschere from the 1928 catalog (pg. 38) for Braunwarth und Lüthke in Germany.

Both feature an adjustable gauge to set the depth of the cut. So, how would one go about using these.?

First, one would need to determine how many cuts need to be made. In most traditions there are letters that might be combined, or even left out. The indexing tabs would also need to be evenly spaced out to have a clean looking index along the foredge. So, how would one do this? Math by dividing height of textblock by number of tabs, or is there an easier way? Well, it so happens that there is, reusable even. As an aside, this idea can also be easily adapted for determining sewing stations of pretty much any number for any common book. Just lay the signature on the template so that the textblock aligns at top and bottom, then transfer marks.

Paul Adams described how to cut these tabs in his Practical Bookbinding (1903) on pages 166-67.

For all such work a thumb index is generally required; each page takes one or more letters, or a specification is given, according to which the binder counts off the number of pages required for each letter—X and Y being here excluded. Nowadays, the indices are cut with index shears, which not only regulates the depth of the index but also avoids the acute angles which are so easily torn in.

Commence cutting from the back, that is, with the Z ; this, being the last letter, is not cut out. Then count off W, cut with the shears, and cut off what remains below to the bottom edge with a sharp knife, to do which a narrow thin board [or sheet of zinc] is slipped underneath. The further you proceed towards A, the longer is the strip which has to be cut out with the knife. When the excisions for the whole alphabet have been made, the letters are pasted on. These are sold ready printed, and nowadays are almost always in one piece for back and front.

The printed sheet with the alphabet is glued or gummed on the back, and, after drying, the alphabet is creased lengthwise and either cut so or punched out with a suitable tool. The single letters are damped and stuck in position.

When cutting with the shears, it is useful to cut a manageable number of pages at a time for comfort, and to keep "round" of the foredge, such as it will be. This cutting, as well as the vertical cut described by Adam above can be done before or after sewing.

Here what the index looks like. Image taken from Mary's copy of Leonard Monk's A Text Book of Stationary Binding, 1912.

Finally, some beautiful images of Mary's German shears, with the final one of them in use.

Posted by Peter D. Verheyen at 1:23 PM No comments:

We all get to deal with "difficult" clients from time to time. It didn't help that I made Bernie wait in the cold, and that the fish skin box wasn't what he expected. Some days you can't win... 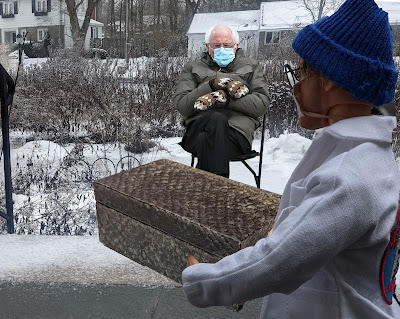 At least he was somewhat dressed for our Syracuse weather. Needs a hat.!
For those not familiar, Bernie Sanders made quite the appearance at President Joseph Biden's inauguration this past Wednesday. Here is the original picture of him in the visitors' seats, just a different view. 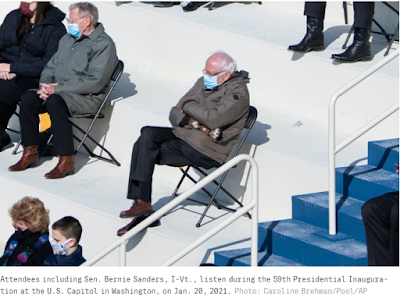 You can see the ever-increasing number of memes at Google. The knitting pattern for the mittens is on https://www.ravelry.com/, account required.
Posted by Peter D. Verheyen at 11:33 AM No comments:

Packing and Shipping Art - An Adventure

Martha Edgerton, book conservator and artist, was one of my first supervisors and mentors when I was a wet behind the ears and ahead of myself work-study student in the Department of Conservation and Preservation (1981-84) at Johns Hopkins. I've always admired her work so was happy to give Human Enclosure II, a powerful statement on the parallels of slavery and mass incarceration here in the United States, a home. It's been wonderful to keep the connection with her all this time.

The work is part of a larger series about the Atlantic slave trade titled The Amazing Race: The Atlantic Slave Trade Through the Pages of Book Art acquired in part by Special Collections at Johns Hopkins' Sheridan Libraries along with other works by Martha. Back in 2017, I was able to see many of those works as part of a larger exhibit at the Libraries titled Freedom Where I Stand that included many historic documents along with works of art that spoke to those themes.

I purchased the piece from a large exhibit held in Baltimore at the Creative Alliance back in July. After the close of the exhibit it took a long time to get the work shipped, and then when it arrived it was damaged in transit. Talking with Martha, she asked to complete the needed conservation treatment and shipped it back to me. That was November 30th, and it took over 6 weeks to make it back to Syracuse.

Martha had her assistant LuLu help secure the elements and pack it up. The two of them did a great job (Martha is a very good teacher). LuLu's small fingers were no doubt an asset and really able to get in there.

So, for the same reason I asked Fritz Otto to unpack. No damage this time.


The work really makes you think about the Black lives destroyed by slavery and mass incarceration. We can and must do so much better.

Posted by Peter D. Verheyen at 3:41 PM No comments:

Below the image for bookbinding from Meinholds Handwerkerbilder. This was number 15 in the series illustrating trades. They were produced by Meinhold und Söhne, Dresden primarily as "posters" that were suspended between wooden rods for classroom use in 1924. The scan below is from a postcard series that was also issued.

Posted by Peter D. Verheyen at 3:00 PM No comments: