Seen on the QEW (Queen Elizabeth Way) leaving Toronto, Canada on the way home this afternoon... One of the most hideous highways I have had the pleasure to drive on. At least something entertaining today... 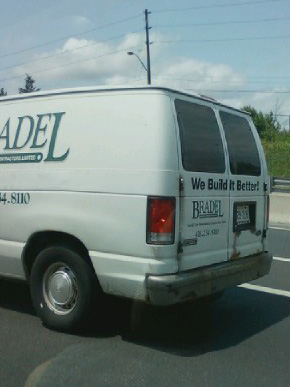 Posted by Peter D. Verheyen at 7:37 PM No comments:

Email ThisBlogThis!Share to TwitterShare to FacebookShare to Pinterest
Labels: Caricatures

This article first appeared in the Guild of Book Workers' Journal, Volume XX, 1981-82. It is reprinted here with the permission of the author.


My association with books began early. Growing up with both parents librarians, lived in a house full of splendid books and often browsed through the remarkable collection of Wittenberg University, in Springfield, Ohio, where my father was and still is Director of the Library As high school graduation approached, I knew that I wanted a career in books and that binding held a particular fascination for me.


What began then was a flurry of letter writing to search out good teachers and places to study, a process that yielded more frustration than results. Finally – a concrete lead that enticed me I Bernard Breslauer responded to a letter: “I recommend that you write to Professor Kurt Londenberg who is, in my opinion, the greatest living German bookbinder." After further correspondence and months of arrangements it was set.

And so, in February 1971, I found myself on a plane to Wiesbaden with one suitcase and a year of high school German. For six months, I worked for Otto Harrassowitz Book Publishing Company (and immersed myself in the German language and way of life At the end of September, I was again traveling to a new city – this time to Hamburg, the Art Academy, and my studies with Kurt Londenberg,

The Art Academy is an L-shaped six-story, red-brick building that borders a canal on one side and faces a lake and Renaissance cathedral on the other. With its magnificent mansard roof it is an imposing sight. At one time the basement housed a veritable zoo with stalls containing horses, cows, birds, and wild animals to provide the art students with live models. Today, fewer 1500 students are enrolled, studying a variety of art disciplines from the traditional studio fine arts to architecture and textile design.

My introduction to Hamburg, the Academy, and specifically the studio where 1 was to spend the next four years was through Frau Barbara Partikel, Professor Londenberg's assistant and the person who patiently took me through the rudiments of binding. On meeting me, she immediately took over with characteristic enthusiasm: helped me enroll, located a place for me to live, and sent me off to the other end of the city to buy bookbinding tools and supplies. As the only full-time student (others came only for brief periods of instruction), r was given the best and most inspirational working area. The studio was a large and spacious room on the third floor with a ceiling that soared twenty feet. My fifteen-foot bench area was situated in the corner with a western view of the cathedral and lake and an expansive northern view of the city and its activities. I had an entire bank of cabinets for my tools, supplies, and books.

On my first official day at the Academy, I met Professor Londenberg, a distinguished looking silver- and white-haired man with a radiating smile that at once revealed an underlying self-confidence and warm, welcoming nature. He was enthusiastic, but serious about his art. "If you work hard, you will get along," he said. I learned that he did not usually have special students and that it had been five years since he had taken a full-time student. Earlier in his career, he would accept students who had completed the three-year German apprenticeship and five-year journeyman studies to prepare them for the Masters-level examinations. Later, he told me that one of the most difficult things he had to do was break many of these students from long-established bad habits.

From the beginning, Professor Londenberg emphasized those elements that contribute to an artistically complete volume: a foundation of good quality paper with the grain running parallel to the spine; strong, but flexible sewing for a sound internal structure; a harmony between the typography and illustrations; and a binding that unified the artistic elements into a complementary whole, but did not overwhelm them. he felt strongly that only the finest editions merited the painstaking attention and artistic efforts of a fine binder. This point was concretely reinforced even early on, as I started my work with Insel Verlag publications: small straightforward volumes of 4 to 5 gatherings each but sensitively produced.

My lessons were geared to my rate of development. I moved from binding thin books with flat backs and simple linen or leather headbands that were cased in paper and untitled to binding thicker books that were rounded and backed and covered with quarter-linen and paper sides. Under the guidance of Professor Londenberg, I progressed methodically. Each day seemed to bring new experiences, but everything had to be just right before I moved on. I learned to sew on marvelous Heger Hanfbänder, tapes made of long flax fibers bonded together, that were incredibly strong but could be frayed out easily at the ends and adhered to the waste sheet. Regrettably, I have never seen these tapes in the United States. [note: these are now available as Ramie tapes] I began making decorated papers (marbled papers, paste papers, wax crayon and solvent papers) and experimenting with the methods available to achieve different images through various patterns and coloration.


During semester break, Professor Londenberg arranged for me to work in the bookbinding firm of Willy Pingel in Heidelberg. There I had a chance to graphically compare my artistic world and instruction with the realities of a semi-commercial bindery. I met young Germans going through the official [guild]-prescribed apprenticeship program. For their three years of training, they worked hard and were paid little. I found that in my first semester I had learned more and worked on a greater variety of books than they had throughout their apprenticeship. The stifling atmosphere created by the apprenticeship system was reflected in the discouragement of one man who was seriously considering leaving binding and forfeiting his years of training. The system requires that a journeyman who wants to advance to the Masters level must leave his old shop and set up a new one after passing his examinations. Because of the resulting competition with older and more established firms, many new firms flounder, discouraging many journeymen from advancing to Master status.

During my second semester, I continued to bind small books in linen and designed paper and added work in quarter-leather and exercises in tooling. Every morning, I would practice tooling using as my tooling surface wooden blocks shaped like books and covered with scraps of leather, attempting to blind tool parallel lines and text of a similar tone. Twice a week, I studied typography as an art and craft with Richard von Sichowsky, a great German master.

Also at this time, I received my introduction to conservation with Frau Wildred Kolmorgen, Head Conservator at the State University Library in Hamburg, when she offered the Library's first conservation workshop. Although the workshop was open only to master binders who worked in German libraries (requirements which I obviously did not meet), I was permitted to attend due to the eloquent persuasiveness of Professor Londenberg. During that month, I learned a variety of techniques: to sew on raised cords, make brass clasps, wash, deacidify, and mend paper. Most exciting, especially for a beginner, was my discovery that the boards used for a particular 1509 Psalter were composed of cut manuscript pages that were eventually pieced back together. Toward the end of that summer, I had the honor of meeting Professor Otto Wächter, Head Conservator at the Austrian National Library in Vienna and instructor in paper restoration at the State Art Academy, who invited me to study with him as a special student on completion of my training in Hamburg.

My second year was more intensely concentrated on the design aspects of fine binding. For each book, I would work out ten to twenty-five designs, discuss them with Professor Landenberg, rework several, pick one, and make final modifications. Only then, and after selecting the appropriate internal structure, color, edge treatment, headbands, and covering material, would any work begin on the unbound book. A protective box lined in silk, felt, or velvet was made for each book.


The remaining time I had at the Art Academy was spent refining the design and technical skills I had learned. One technique particularly favored by Professor Londenberg, and one I still choose frequently, is the use of dies which opens a range of design possibilities. A photographic process can transfer any
black and white image onto zinc plates that are deeply etched and mounted onto type-high metal blocks for heated impressions or onto wood for cold embossing.

Throughout my years of instruction, the functional integrity of the book was always stressed. The outward design of the covering was never permitted to usurp the inherent utilitarian nature of the book. Flexibility and ease of use were insured by a hollow back (even over raised cords) so that no leather was ever directly adhered to the spine, thus eliminating any possibility or restriction in opening.

There are many particulars of my years spent in Hamburg at the Art Academy that I have not touched upon. But it was not my intention to write a complete, or even comprehensive, essay on my training there. Rather, through this personal account I have tried to highlight some of the aspects that made my training a unique and exciting experience.


Some other examples of his work can be seen on his website at Restore Paper.


On a personal note, I want to thank Frank for encouraging me to study bookbinding in Germany following college. It was not until after I returned for the Christmas holidays that I learned that the apprenticeship experience I was having was not in the least like his more academic training, an experience that I thought I would also have. Despite that, and in spite of the challenges I faced, some of which mirror what he observed during his stay in Heidelberg, I feel that my formal "guild prescribed" apprenticeship provided me with a very solid background and prepared me well for working as a binder and conservator. More on that in a later post. Peter D. Verheyen.

Posted by Peter D. Verheyen at 5:04 PM No comments: