The Jahrbuch der Einbandkunst (Yearbook of the Art of Bookbinding) was a journal published 4 times, 1927, 1928, 1929/30, 1937. It was published by the Meister der Einbandkunst (MDE), the German association of masters of the art of binding that grew of out the Jakob-Krause-Bund. Both organizations included some of the most influential German binders of the late 19th and early 20th century, among them Paul Adam, Otto Dorfner, Paul Kersten, Franz Weiße, and Ignatz Wiemeler.

Published in German, each volume was divided into two parts, with essays by leading scholars in the field on historic and contemporary bookbinding, respectively. Included in the contemporary sections were "reviews" of the state of fine binding in individual nations allowing the reader to compare trends in design and see who was coming up in the field. The date range of 1927 - 1937 is also very interesting in particular when viewing the German contributions as this period covers the Depression, Weimar Republic, the period of the Bauhaus, and the ascendency of the Nazis. All these influenced binding design and content, often quite graphically - art, craft, and politics are very intertwined. 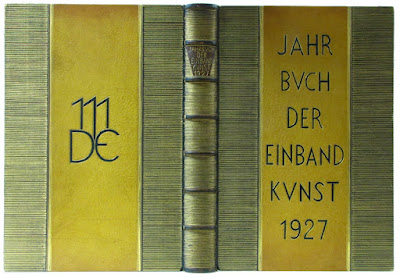 The copy above, bound by/in the firm of E.A. Enders (Leipzig) is from my collection. I remember being blown away by it on many levels when it was brought into Bill Minter's shop by a dealer who wanted to have a nice clamshell box made for it. Much to Bill's chagrin, the book was sold on the spot (for what was then a lot of money to me). I made a box shortly thereafter in my own, then modest dining room "studio." I very quickly found myself sucked into the essays, especially the ones on contemporary binding. It was my first (and really only) design binding purchase, and I still love to study the design, the combination of decor, the typographic elements - Germans integrated the title into designs more so than other traditions - and also the little flaws that make it "human." For instance, the titles on the spine and boards were tooled not from cast type/letters, but pieced together from various straight line pallets and curved gouges like those below.

Over time I was able to acquire the remaining 3 volumes, all in different bindings - plain 1/4 leather, rough cloth, and the paper wrapper in which it was issued. Together they provide a tremendous snapshot of the work being produced in Germany and around the world during a tumultuous period.

Other bindings on this journal can be viewed online below. Image quality not great, but they show a wide range of binding styles.
To find the journal at a "library near you" go to WorldCat.The archive of Meister der Einbandkunst is at the University and Regional Library Münster.
Posted by Peter D. Verheyen at 11:50 AM No comments: