And now a slightly different depiction of bookbinders at work. The embarrassed gentleman at left is in all likelihood a journeyman binder with the master at right. 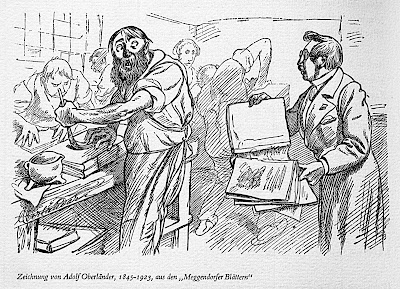 It seems we have some quality control issues.. 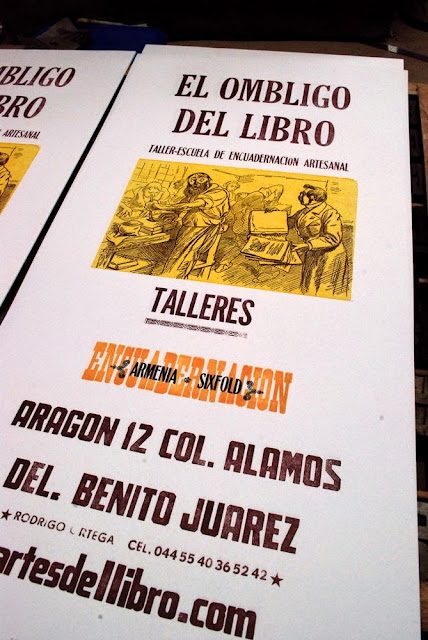 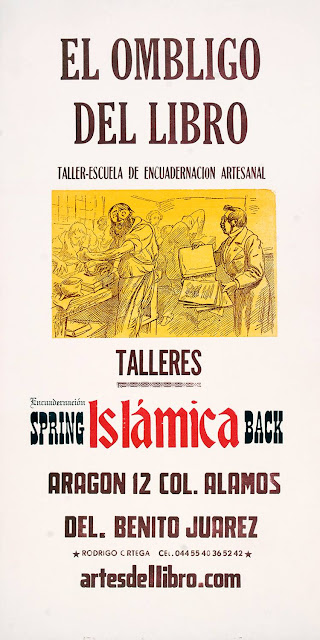 Posted by Peter D. Verheyen at 8:03 PM No comments:

This article continues part I.

In his introduction to Adam’s Leitfaden für die Gesellen- und Meister-Prüfung im Buchbindergewerbe (1904) Obermeister (Grand Master) Slaby of Berlin, Chair of the Federation of German Bookbinding Guilds, notes that in the short time since the adoption of (not yet mandatory) state regulated examinations for journeymen and apprentices, the need to formally define these examinations and to strive towards uniform action in the bookbinding field has revealed itself.

While the hands-on works were with few exceptions quite good, the same could not be said for the more theoretical aspects of the profession where there were severe shortcomings, with the oral examinations being even worse. Based on these observations the Masters in the Guilds and the heads of the Examination Boards decided in 1902 to create a guidebook (the Leitfaden) for these examinations, a challenge taken on by Paul Adam of Düsseldorf.

Adam took it upon himself to expand this guidebook well beyond the minimum requirements of defining the core questions apprentices and journeymen would need to answer in their respective examinations. By adding additional subjects Adam sought to provide the basis for a well-rounded and professionally aware bookbinding professional. This process of life-long learning would begin during the apprenticeship and be built upon during the binders journeymen years. Subjects added to this guidebook include a history of the book (and bookbinding), a history of the bookbinding trade. The complete contents were listed in the previous post.

While the original intent was to publish separate volumes for apprentices and journeymen, Slaby notes that the Federation became convinced that the sooner apprentices began to familiarize themselves with the knowledge required to become a master, the easier it would be for them to progress through the ranks and become a master in their own right. As a result, trade schools (attendance at which was mandatory) were strongly urged to adopt this guidebook, and masters encouraged to impress its value upon their apprentices. At the same time members of the examination boards were told to familiarize themselves with the content of the book in the knowledge that those being tested by them would no longer “quake  and be fearful” as they would be better prepared.

Overall, the tone of the guidebook was professionally stimulating, without becoming overly pedantic so that binders of all levels would want to consult with it regardless of their rank. This guidebook was not a bookbinding manual, giving only superficial attention to the details of particular binding styles but it was also more than a mere introduction to the field as it also contained details about the structure of the guilds, the ranks one could attain (apprentice, journeyman, and master) as well as sample questions for those respective examinations.

While Adams' manuals Der Bucheinband: Seine Technik und seine Geschichte (1890), Die praktischen Arbeiten des Buchbinders (1898), also published in English as Practical Bookbinding by Scott, Greenwood & Co. (London) in 1903 did not formally address the structure of the trade they did describe the work of binderies and their outfitting. With the formalization of the bookbinding trade, manuals began to appear that incorporated many of the aspects of this first guidebook, in particular sections on the history of the book and trade, “materials science,” estimating, sample questions in preparation for examinations. An example of this type of manual is Heinrich Lüers’ Das Fachwissen des Buchbinders that appeared in numerous editions (Deutsche National Bibliothek has 1939 as earliest edition). At the same time more pamphlet-like introductions to the bookbinding trade continued to be issued, often by the same authors.

Integral to the training of bookbinders of all levels were also the trade schools that complemented the hands-on on-the-job training provided in the individual binderies, offered courses for continuing education, and served as venues for the trade examinations. The trade schools also provided coursework in social studies, math (especially as it related to the trades, including estimating), and other subjects, something that was critical especially when apprentices were younger (as young as 13). This need for an “equalizer” was still evident when I served my apprenticeship in Germany from 1985-87 when my trade school class included those with university qualifications as well as those who left school early to learn a trade and ended up with publishers stapling magazines (also part of the hand bookbinding trades) all of whom needed to pass the same national examinations. Special courses in working with commercial grade high-speed folding machines and cutters were also included to provide a bridge to the industrial binding trade.


I've had Adams' Leitfaden in my collection for some time, but as I was writing this, and searching for something online I tripped across Max Eschner's Der Buchbinder: Ein Lehr- und Lernbuch für Fachschulen, Fortbildungsschuen und zum Selbstunterricht, (Stuttgart: Hobbing & Büchle, 1898) similarly addresses the needs for a robust and comprehensive education in the bookbinding trade. It was based on the lesson plans of the municipal trade school for boys in Leipzig.A difference that was immediately noticeable was the inclusion of much bookbinding lore, including songs and poems that binders of all levels would have learned. More on Eschner in a later post.I am certain that others will appear over time as well... 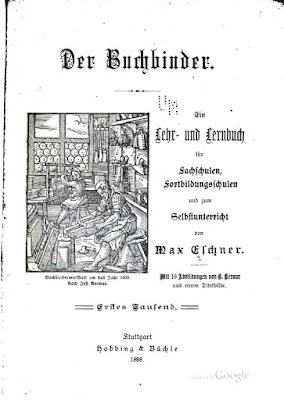 Posted by Peter D. Verheyen at 7:52 PM No comments: