First, two titles by Paul Adam. The first is Lehrbücher der Buchbinderei: Die einfachen handwerksmässigen Buchbinderarbeiten ohne Zuhilfenahme von Maschinen (1924) a thin manual describing the most basic and essential tasks to be completed in a bindery leaving out machines. (boardshears and presses don’t count). Obviously written for apprentices, this one came from the public library in Bayreuth and showed a fairly active circulation in the first decade of it’s life. Then came the war… Paper not great, but lots of provenance. It’s also the kind of title that would have been in every proper trade school library and larger bindery. Needs some TLC, but then there is the bit about the shoemakers kids (and I had 7 generations of master shoemakers in my family)… 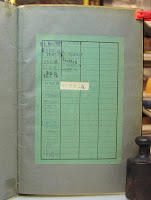 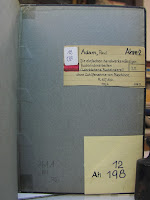 The other Adam title in this batch is Die deutscheste Art der Einbandverzierung (1928), a Festschrift for the 47th gathering of the Bundes Deutscher Buchbinder-Innungen. Not sure why it was the titled “the most German of binding decoration techniques” (tooling), but looks to be an interesting read. That was “bound” into a simple card wrapper… Like the one above, needs some TLC to make sure the single leaves don’t fall out.

Next up E(rich) A(dolf) Bogeng’s Der Bucheinband: ein Handbuch für Buchbinder und Bücherfreunde (1940). Title translated is Bookbinding: a handbook for bookbinders and bibliophiles. It’s an interesting overview of the book and book/trade history broken down into by general history; structural elements;  decorative techniques; binders and bibliophiles, … I found the arrangement the interesting part – there are no illustrations. Bogeng was one of THE German writers about bookbinding and bibliophilic culture in the late 19th, first half of the 20th century. This one was reprinted in several editions. 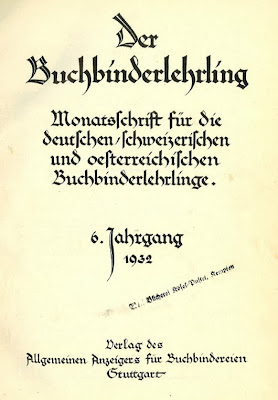 I also acquired two volumes of Der Buchbinderlehrling (The Bookbinding Apprentice) a “journal” published for apprentices in Germany, Austria, and Switzerland by the Allgemeiner Anzeiger für Buchbindereien, the trade publication late 19th century and most of the 20th century. A journal like this was a bridge to trade school that continued the overall education of the young apprentices because they were dropped from the university-bound track. Subjects included social studies, math, and science as they related to binding. This also included paper making, leather tanning and parchment making, cloth, and in-depth engineering of bookbinding machines...

First in 1932, an article by Ernst Collin and the first in a series titled Bedeutende Männer des Buchbinderhandwerks (Important Men in Bookbinding) – the subject, Ernst's father Georg Collin, Court Bookbinder who died in 1918. Ernst' Der Pressbengel was dedicated to him. While most of Collin’s writing is academic, this was written with a much more casual tone making it more accessible for apprentices. There was also a multi-part article on gold tooling by Walter Gerlach (1892 – 1982). Trying to find out if there was a connection between him and Gerhard Gerlach. Gerhard Gerlach married Kathryn Edwards, and both studied with Wiemeler in Leipzig in the early 30s. There were also two tipped-in cards with material samples and articles on how to use those, a nice article about the life and impact of Roger Payne (illustrated by the engraving of him hunched over a press), and one telling soon to be journeymen that despite the fact that most would be unemployed after completing their apprenticeship, that they should remain hopeful and engaged. Also an interesting, ongoing series about architectural styles and history. 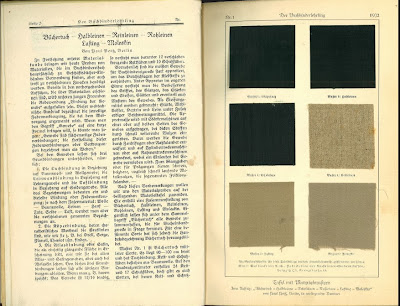 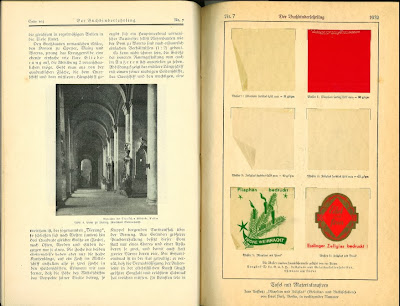 1938 was quite a change, and it was clear who was now running the country. Oddly, issue 1 from 1933 had been bound in instead of 1938... The volume had an article on fish leather, Igraf (a cellulose-based ersatz paper/parchment with the look of Elephant Hide, a paper now produced by Zanders, and a longer article by Franz Weisse on marbling. This contained the same illustrations as his work about marbling that was republished by Richard J. Wolfe as The Art of Marbling (Wolfe also had some things to say about the politics of the time). To round it out, articles on the need to bring bookbinding (and all the trades) into the nationalistic fold, competitions for apprentices and journeymen, depictions of bindings extolling the virtues of the Führer and Party… One image showed Otto Dorfner, Hugo Wagner, and Franz Weisse jurying bindings, some with their party pins in place… Below another from a national trades meeting. The "youth" of the trades are being addressed... 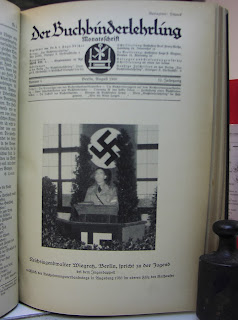 Buchatelier Bischoff in German is reprinting the complete run of the Buchbinderlehrling (1927 – 1944) on a subscription basis, every two months a new year... I already received 1927. No Ernst Collin articles, but several by Maria Luers, the first woman bookbinding Meister in Germany. This is going to be fun. They also republish many other classic German binding titles in sheets or bound. Check them out.


Almost as a logical follow-up to the 1938 issue above, a nice catalog Ausstellung Malerei, Graphik, Buchkunst (1955) that featured bindings by Otto Dorfner in addition to the prints and paintings by two other artists. Dorfner worked largely in Weimer, a town that ended up in the Soviet Occupation Zone after the war, what became the German Democratic Republic (DDR). Stylistically, the binding shown continue the strong German style of design and tooling that was also used by Wiemeler…. Interestingly, in addition to books by Goethe, there are also bindings on works by Stalin, Karl Marx, Ernst Thälman, Wilhelm Pieck, … Communists, Soviets, and East German leaders all.

I think that there is a post/article in there about politics and the trade(s). Just need to line up some visuals (have lots in various books) and try to find some examples elsewhere. I could start it off with a "song" sung at the German Bookbinder's Assembly in Berlin in which the formation of the German Empire in 1871 is described in the context of binding a book... Designer Bookbinders had a 2008 exhibition Socialism: A Celebration in which binders selected historically significant socialist texts from the collection of Lord Tom Sawyer of Darlington, but that exhibition was not about the bookbinding trade in the service of a particular ruling ideology. There is also a rich history of Marxist (and other) children's books, but that's not design bookbinding either... If anyone has any examples I'd love to hear about them.

Another book was the 1995 Festschrift of the Buchbinder-Innung (Guild) Berlin-Brandenburg. Lots of interesting details about the trade in Berlin over 400 years also indicating some differences with the Verein Berliner Buchbindermeister (Organization of Master Bookbinders in Berlin) whose Chronik I also own, and that provided lots of good information on the Collins. Some of the differences apparently center on Maria Lühr (first woman to learn the trade under Georg Collin and Joseph Zaehnsdorf, and first female Meister in Germany), the role of women in the trade and training, and the Lette Verein, an organization for women that taught trades. It still exists.

I had long had a copy of Lawrence S. Thompson's Kurze Geschichte der Handbuchbinderei in den vereinigten Staaten von Amerika (Stuttgart: Max Hettler, 1955), and given that Thompson was American working at the University of Kentucky Library was perplexed to not find the title available in English. That changed this week when I received A Short History of Bookbinding in the United States by Lawrence S. Thompson. From the dealer copy:


This is from a most curious assembled typescript I just bought, "with pp. 1-12 (and possibly an unnumbered 13th page following) provided in original typescript, pp. 11-34 (continuing the text uninterrupted, though in a different type font) provided in facsimile/photocopy, all printed on recto only. The latter portion shows several stamps from the University of Kentucky Libraries and various corrections to the typescript, so we are tempted to assume that it may be a copy."

I was able to confirm that this is the original English of an article published in/for Germany. I couldn't find an English version of my "unpublished" typescript, OCLC shows that just at the University of Kentucky where Thompson was Librarian. Vito J. Brenni's bibliography Bookbinding, a guide to the literature indicates that this was published in English as Some Notes on the History of Bookbinding in the United States, American Book Collector, Vol 7, Nos 5-7, Jan-Mar, 1955. Still trying to find a copy though... Interestingly found what seems to be an abridged version of the article in a journal - Hand Bookbinding in the United States Since the Civil War, Libri, Vol 5, no 2, 1954 (97-121)

Thompson's titels contain much information of interest (in particular to me) on German-trained binders in the US. Many of those named were indicated as being members of the Guild of Book Workers, too. He also published Fine Binding In America, The Story Of The Club Bindery, but that is a different book. A Short History... concluded with "Even in the atomic age, hand bookbinding will have a strong place in the culture of the United States." Thoughts?

The interlibrary loan department at Syracuse  also came through with some articles by Ernst Collin from 1934-36, and one about the Collins' as Hofbuchbinder that also mentioned Ernst from the 1947 (all from the Allgemeiner Anzeiger für Buchbindereien). VERY glad to have those.
Posted by Peter D. Verheyen at 3:41 PM 1 comment: