Visit to a Hand Bindery in Trier - Buchbinderei Mohr

Was searching YouTube for some bindery videos from Germany and came across this one from the Buchbinderei Franz Mohr in Trier, Germany. The Buchbinderei was founded in 1864 (via Archive.org), and was stop 1 on my apprenticeship interview tour in May 1985. The location was very convenient as I flew into Luxembourg from Baltimore... Trier has an incredibly rich history.

Here the video that shows the steps of case binding journals and periodicals for town, municipal, medical, law, ... Below the full video.

I did not end up apprenticing there, but it was the hand-bindery the other two I visited were compared to in terms of the type of work completed and overall atmosphere.

Posted by Peter D. Verheyen at 2:42 PM No comments:

It was once again my pleasure to collaborate with Don Rash and his Boss Dog Press by translating essays from the German that highlight the work of one of that tradition's finest binders, a student of Ignatz Wiemeler. From the downloadable prospectus:

The Boss Dog Press is pleased to announce the upcoming publication of Fritz Eberhardt’s Finishing Tools and Technique, the sixth book from the Press and the third volume in the series Eberhardtiana. The goal of this series is to preserve the writings and art of fine hand bookbinders Fritz Eberhardt (1917-1997) and his wife Trudi (1921 -2004). In addition to being two of the finest binders of the twentieth century, Fritz and Trudi were teachers, mentors and good friends to many practitioners of the book arts, and their work and lives deserve to be remembered and celebrated. It has been the honor of the Press to do this in a small way.

Finishing Tools follows 2004’s Rules for Bookbinders and 2014’s Three Lectures. It catalogs 94 unique finishing tools which Fritz fabricated for tooling in blind and gold on his design bindings. Each tool is represented by a description, measurements, and a scanned image of the tool’s impression. There will also be digital photographs of the tools, of the electric tooling station that Fritz used, and of a paper tooling pattern used on Fritz’s design binding of Gordon Craig’s Paris Diary. The catalog proper is preceded by two essays dealing with Fritz’s work, one by Professor Hans Halbey and one by Fritz himself. The essays were published together in the March 1990 issue of the German bibliophile journal Philobiblon.

This is the third volume of EBERHARDTIANA. It was compiled, designed and executed by Don Rash, with the ongoing support of Elaine Rash. Types used are digital versions of Herman Zapf's Aldus for the text and Michaelangelo for the titling. The book was composed in Adobe InDes1gn. Boxcar Press supplied the polymer plates for printing. The paper was made at the University of Iowa Center for the Book by Tim Barrett and student co-workers, and as printed damp on the BDP Washington handpress. Inks are Graphic Chemical Albion

Matte Black and Hanco Leaf Brown. The tool impressions in the catalog were done by scanning smoke proofs, converting them to printable images in Adobe Illustrator and printing them with the text. All photographic images are digitally printed onto 48 gram Asuka paper.

The edition consists of 80 copies, with 10 copies (I-X) unbound, and with 50 regular copies (1-50) and 20 hors commerce copies(A-T) bound in full decorated paper over boards with leather strips at head and tail.

To learn more about the Eberhardt's, read their oral history recorded by Valerie Metzler, in which they discuss their life, their training, their time in the United States, and much more. It can be found in Volume 37, Number 2, 2002 of the Guild of Book Workers' Journal. Very much worth reading.

Posted by Peter D. Verheyen at 3:45 PM No comments:

500 Years of the Art of Printing

Just received this lovely tunnel book, 500 Jahre Buchdruckerkunst, 1440 - 1940, that was issued by the Bauersche Gießerei (Bauer Type Foundry) in Frankfurt. It was created by the illustrator Fritz Kredel. Kredel was helped out of Germany by Melbert Cary in 1938. RIT's Cary Graphic Arts Collection was endowed by the Mary Flagler Cary Charitable Trust as a memorial to Mr. Cary, together with funds to support the use and growth of the collection. As they don't seem to have a copy, it seems only fitting to gift it to them.

For a while it seemed the little gem was lost. But no, the journey from the antiquarian dealer in Madgeburg to Syracuse took 3 months and the item dropped out of postal tracking systems after 2 months, only to reappear the day before it arrived. Who knows where it languished, Frankfurt airport, New York?!?

Here Fritz Otto helps me set it up for these pictures by holding on to the far end.

As this is a German print shop, the paper will in all likelihood be unsized at this stage. As described in Prediger's Der Buchbinder und Futteralmacher (1741), the binder will size and beat the paper with a specially shaped heavy hammer before binding. Jeff Peachey describes this process in detail on his blog.

Posted by Peter D. Verheyen at 2:43 PM No comments:

Another Sprayed and Stenciled Paper

Recently acquired another volume of the Archiv für Buchbinderei (Vols. 21-22, 1921-22). Another article by Ernst Collin, and 2 brief mentions/reviews of his Pressbengel. More about the Schablonenspritzpapier technique here and here. 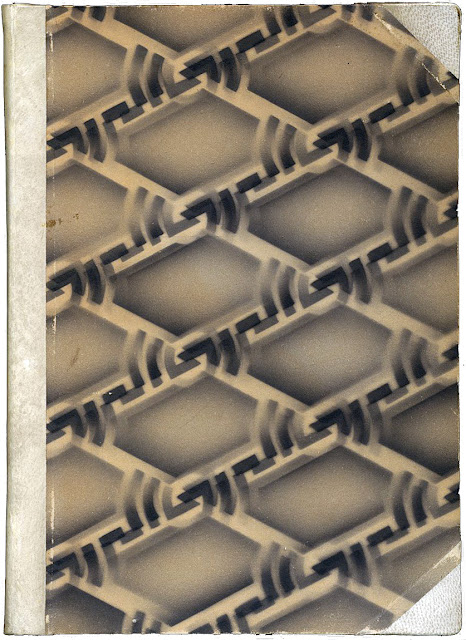