A small etching from my collection...

Posted by Peter D. Verheyen at 8:07 PM No comments:

Werbung - "And now a message from our sponsor"

Recently acquired the 1927 issue of the Allegmeiner Anzeiger für Buchbindereien, the leading trade weekly for bookbinders, in part because it is a nice complement (and contrast) to my 1927 copy of the Jahrbuch der Einbandkunst published by the Meister der Einbandkunst. I was also very glad to find numerous articles by Ernst Collin, to whom this blog is dedicated in it (and will shortly be adding to the growing bibliography of his writings I am compiling).

As with all trade publications, there is lots of advertising, so below a selection that spoke to me today... 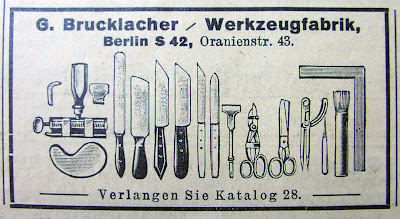 Posted by Peter D. Verheyen at 2:39 PM No comments:

Exlibris, In the Ruins of a City...


I recently acquired this desolately charming bookplate for Hanns Heeren by Ernst Heig[enmoser]. The bookplate shows a group of bibliophiles looking at books amidst the ruins of a recently-ended war. The sign in the background says Ex-Libris Freunde, or Friends of Ex Libris, the book on the left Samm-lung Heeren (Collection Heeren, whose bookplate it is, and the books on the right have on them [Walter von] Zur Westen, [Friedrich] Warnecke, and [Richard] Braungart. All three published books illustrating artistic bookplates. Links with their names take one to online examples of some of these books.

Heigenmoser (1892-1963) was German painter, commercial artist, and industrial designer in Munich. Heeren (1893-1968) was a German librarian who became a military pilot serving in both World Wars, but more significantly was a composer of German "volkslieder" (folk music) extolling the virtues of heimat, wandering, the countryside... He was also apparently a collector of bookplates judging by other examples found during Google searches. Here some examples:

In a case of serendipity, today, two days later I received the journal below featuring an article by Ernst Collin entitled "Der schöne Bucheinband" (The Beautiful Bookbinding). As I am usually single minded I don't even know if I looked to see what other authors were mentioned and/or remembered whose bookplate I ordered. In flipping through the issue also found an article by Hanns Heeren of the bookplate above on "Künstlerische Neujahrswünsche" (Artist's New Years Greetings). Fun!


To close, the iconic image of the Holland House library, bombed
out in 1940 during the Blitz. Compare with our first image. 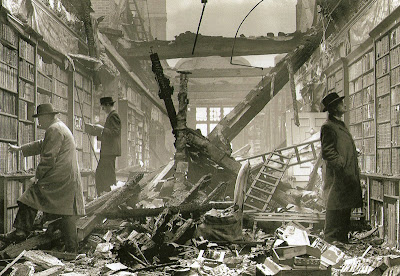 Posted by Peter D. Verheyen at 5:37 PM No comments: