Old Man and the Sea

We saw Fritz Otto helping turn that delicious mackerel into parchment. Here the binding one of the half-skins was used on, Hemingway's Old Man and the Sea. The other half goes in the skin archive. Below the binding I just completed.

Recently acquired another bookbinding supply catalog for my library. The one below, Holz-Werkzeuge für Buchbindereien, focuses on wooden presses and related equipment for binderies. It was issued by the firm of Edmund Junghändel in Nuremberg, 1927. Junghändel also sold other binding supplies, was a wholesaler for decorated papers, and sold machines for all paper industries. 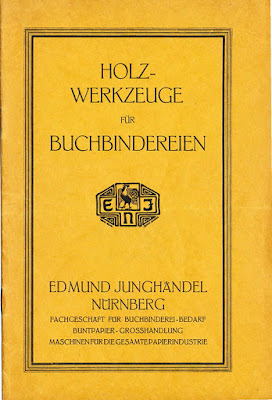 I could also acquire an invoice from the company for 33.5 meters of black calico bookcloth. The invoice is not from 1927, but rather 1914, and shows their building at Molkestrasse 1. 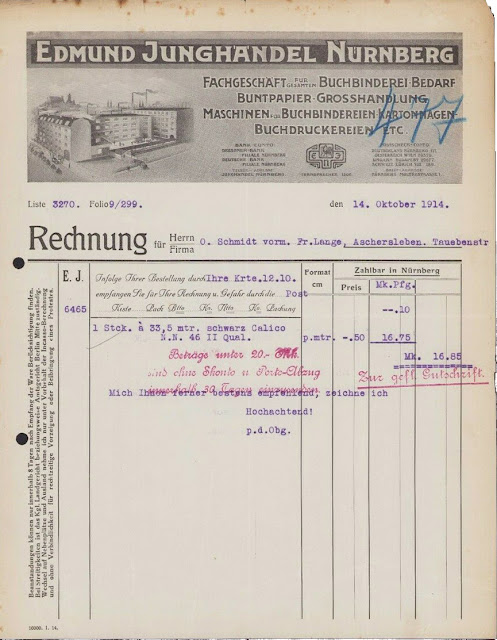 Based on the image on the invoice that also shows the "Burg" in the old part of the city at top left, the location of the company is now a school, and Moltkestrasse turned into a bike path alongside.

Email ThisBlogThis!Share to TwitterShare to FacebookShare to Pinterest
Labels: History of the Trade, Library, Tools

I love springback bindings, especially the German version I learned during my apprenticeship. Below images of one I completed on the textblock of the exhibit catalog for L'Infinito, one of those international bookbinding competition and exhibitions. This one was organized by the Provincia di Macerata. Competitors were asked to design bindings for the poem L'Infinito by Italian poet Giacomo Leopardi (1798-1837). The catalog has a section for the 125 bindings that formed the exhibition and are considered the best of the entries submitted. The remaining 475 submissions are divided by national school and reproduced without commentary. I lifted the description from Oak Knoll Books who have a copy of the catalog available in case someone wants to bind it. ;-) I never bought the set book for the exhibit, but did get the catalog as I have a great weakness for exhibit catalogs for my personal library.


This all makes for a very hefty tome, just begging for a springback binding. I wanted to show the underlying structure and love veiney calf parchment. This is what I came up with:


My tutorial for the German style of springback can be viewed here and downloaded here.

Posted by Peter D. Verheyen at 2:17 PM No comments:

Ernst Collin (5.31.1886-12.1942), the grandson of Wilhelm and son of Georg, followed in the family tradition and learned the trade of bookbinder initially. However, where he apprenticed and worked during his journeyman years is not known. Likewise, nothing is known about his childhood or personal life beyond what he wrote about his grandfather and father.

What little we do know comes from Ernst’s writings, where he described studying for a semester under Paul Kersten in the first class of the Kunstklasse of the Berliner Buchbinderfachschule für Kunstbuchbinderei directed by Gustav Slaby in 1904.1 The Kunstklasse (Art class) at the Fachschule Ernst Collin mentioned himself studying with Paul Kersten and others at in “Ein viertel Jahrhundert kunstbuchbinderischer Erziehung - 25 Jahre Berliner Kunstklasse“ (Archiv für Buchbinderei, Vol. 29, Nr. 9, 1929. (106-108)), was not mentioned at all in my new acquisition. nor was Kersten mentioned in the list of faculty. Re-reading Collins article about a quarter century of the Kunstklasse I learned that it had been a part of the Guild's Fachschule, but that split apart after 19 years in 1923. The Kunstklasse then moved to an arts & crafts school in Charlottenburg in the western part of Berlin. According to Collin, the split happened due to differences in pedagogy and philosophy, the Kunstklasse being there to teach students to be free from creative constraints, whereas the Guild's more rigid approach was geared to the trade. Those differences were also apparent when I visited the Berufsschule (trade school) during my apprenticeship.
However, as G.A.E. Bogeng wrote in his introduction to Collin’s antiquarian catalog, Collin worked as a bookbinder for many years in Germany and England.2 Ultimately, Ernst chose to follow a different path: antiquarian and writer.

Email ThisBlogThis!Share to TwitterShare to FacebookShare to Pinterest
Labels: Ernst Collin, History of the Trade

Ignatz Wiemeler and Gerhard Gerlach Together at MoMA

MoMA in NYC has placed records of its exhibitions from the founding in 1929 to the present online. Included are some catalogs, some images of the installed exhibits, checklists, and press releases in some combination and to varying degrees. While not on display at the same time, both Ignatz Wiemeler and Gerhard Gerlach exhibited at MoMA.

Among them is the catalog to the 1935 exhibit, Ignatz Wiemeler, Modern Bookbinder!


The catalog also references the article "Bookbinding, Old and New" by Wiemeler that was published in The Dolphin, No. 1, 1933. The complete run of The Dolphin is online at Carnegie Mellon University. This was his only publication in English.

Wiemeler student Gerhard Gerlach was himself part of an exhibit titled The Arts in Therapy,
February 3–March 7, 1943. The items in the exhibition represented "a selection from a nationwide competition, open to all American artists and craftsmen, for new designs and objects in those crafts acknowledged to have therapeutic and recreational value for disable ad convalencent members of the Armed Forces."

In the category "projects for patients," Gerlach received an "honorary award" with a Morris Levine for a lap board that was used for binding. Gerlach die the bookbinding. Levine was credited for the lap board. A lap board can be seen at right in the image from the exhibition below.


These kinds of activities, including for veterans were not unique to the United States. A contemporary example from Germany was Ruth Zechlin's Soldaten Werkbuch für Freizeit und Genesung. Ravensburg: Otto Maier Verlag, 1943 (2nd ed). It was designed for convalescing soldiers and those on leave, and starts off with instructions for making a Bett-tisch (bed table) for making the quite complex projects on. These include wood working, origami,bookbinding, dolls, all manner of crafts really. See some images showing the cover with pasted-on label, title page, the Bett-Tisch, and examples of bookbinding in the post "Bookbinding for Rehabilitation." More articles here.
Posted by Peter D. Verheyen at 12:43 PM No comments:

Lunch Instead of Fish Skin Binding

Back before Christmas, Fritz Otto was on vacation in Greece (aka Wegmans like any good fisherman) and caught a bunch of sardines. Finally, a right-sized fish he could work from start to finish for his own binding(s). 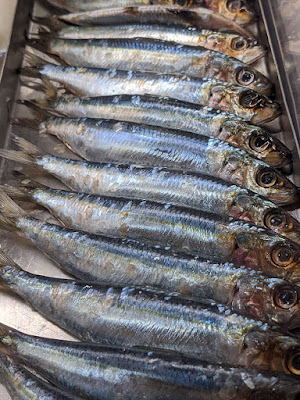 Today, pulled them out of the freezer to practice his flaying skills...


Filleting was the easy part, but alas, the skin was too thin to get off. He also tried pulling it off of the intact fish but that was even less successful. Alas..., nothing left to do but make lunch for himself.

So, defeated in making parchment, successful in preparing a meal.

Posted by Peter D. Verheyen at 1:37 PM No comments: