About Slipcases from the Lakeside Press

It is fairly uncommon to see coverage of the work of American binders and binderies in the German trade press. Below "a few words about slipcases" as they are made at the Lakeside Press of R.R. Donnelly in Chicago, at that time under the direction of Alfred de Sauty.

The article starts out by mentioning the efforts that go into a fine binding and that [as a consequence] bibliophiles take greater care to protect them, including the construction of enclosures. The slipcases illustrated in the following images are all custom-made (or as we now say "bespoke" 🤮).

– From Philobiblon, Nr.1, 1938. Philobiblon was a leading German bibliophilic journal.

Email ThisBlogThis!Share to TwitterShare to FacebookShare to Pinterest
Labels: Techniques

The Crafts of Germany

The different crafts in Germany are incorporations recognised by law, governed by usages of great antiquity, with a fund to defray the corporate expenses, and, in each considerable town, a house of entertainment is selected as the house of call, or harbor, as it is styled, of each particular craft. Thus you see, in the German towns, a number of taverns indicated by their signs, as the Masons' Harbor, the Blacksmiths' Harbor, &c. No one is allowed to set up as a master work man in any trade, unless he is admitted as a freeman or member of the craft; and such is the stationary condition of most parts of Germany, that no person is admitted as a master workman in any trade, except to supply the place of someone deceased, or retired from business. When such a vacancy occurs, all those desirous of being permitted to fill it present a piece of work, executed as well as they are able to do it, which is called their master-piece, being offered to obtain the place of a master workman. Nominally, the best workman gets the place; but you will easily conceive, that, in reality, some kind of favouritism must generally decide it. Thus is every man obliged to submit to all the chances of a popular election whether he shall be allowed to work for his bread; and that, too, in a country where the people are not permitted to have any agency in choosing their rulers. But the restraints on journeymen, in that country, are still more oppressive. As soon as the years of apprenticeship have expired, the young mechanic is obliged, in the phrase of the country, to wander for three years. For this purpose he is furnished, by the master of the craft in which he has served his apprenticeship, with a duly-authenticated wandering book, with which he goes forth to seek employment. In whatever city he arrives, on presenting himself with his credential, at the house of call, or harbor, of the craft in which he has served his time, he is allowed, gratis, a day's food and a night's lodging. If he wishes to get employment in that place, he is assisted in procuring it. If he does not wish to, or fails in the attempt, he must pursue his wandering; and this lasts for three years before he can be anywhere admitted as a master. I have heard it argued, that this system had the advantage of circulating knowledge from place to place, and imparting to the young artisan the fruits of travel and intercourse with the world. But, however beneficial travelling may be, when undertaken by those who have the taste and capacity to profit by it, I cannot but think, that to compel every young man who has just served out his time to leave his home, in the manner I have described, must bring his habits and morals into peril, and be regarded rather as a hardship than as an advantage. There is no sanctuary of virtue like home. — From Everett's Address. 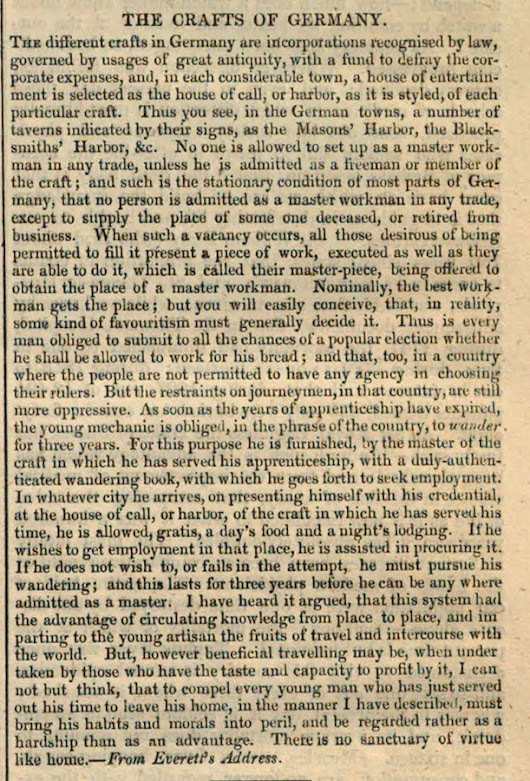 I recently acquired several new items connected to the Collins.

First is a publishers' binding, Georg Friedrich Händel by Fritz Volbach, part of a larger series about Berühmte Musiker (Famous Musicians and Composers). The book was published in 1898 and represents the kind of work that W. Collin did as a large trade bindery. On the back W. Collin's stamp in a variant I had not seen until now. You can see other examples here and the Pan after Clavigo here.

The other is a book about the artist Adolf v. Menzel bound by W. Collin after 1906. The cover design is in leather relief, and I suspect the binding was created after 1918, and the death of Georg Collin on 24 December of that year,  as the signature in gold on the front turn-in does not include Hofbuchbinder. The monarchy had ended with the end of World War I, so there were no more Court bookbinders.
[Edit: Found the binding depicted in G.A.E. Bogeng's Deutsche Einbandkunst im ersten Jahrzehnt des zwanzigsten Jahrhunderts, [1911]. See here for more.]
Then from the father to the son, the complete run of Die Heftlade edited by Ernst Collin, printed on rag paper, #15/400, and as published 1922-24 in individual issues. I have had a complete run with all inserts for some time, but it is nice to have them as issued.
In with the Heftlade was also a catalog for the Euphorion Verlag that published the Heftlade, and Ernst Collin's Pressbengel. You can find the Pressbengel on page 2, and the Heflade on the last.
Finally, I was offered a copy of a "Sonderdruck" (special printing) of the Heftlade from 1925 about Jean Grolier. It's printed by the same firm that printed the full run, but I'm finding it hard to place as there is no editorial information... Another mystery.
Posted by Peter D. Verheyen at 2:47 PM No comments: