I've had this poem parked for future sharing, but prompted by the American Bookbinders Museum in San Francisco that started sharing bookbinding songs on its blog (and here), I decided to translate this poem that was read at the German Bookbinder's Convention in Berlin, 1882. At the celebrations, the "Altmeister" Wihelm Hoppenworth presented the following poetic tribute to his Imperial Majesty, the German Kaiser... Hoppenworth was "Obermeister" of the Berlin bookbinding guild at the time.

Here the German original from the Teltower Kreisblatt, August 26, 1882 (pg 3). Teltow is a part of Berlin. A translation into English is below with links to articles in Wiki about the historical events mentioned. Die mit Deutschkenntnissen können einfach die Abbildungen lesen... Links zu längst vergessenen Ereignißen sind in der Übersetzung ins Englische... 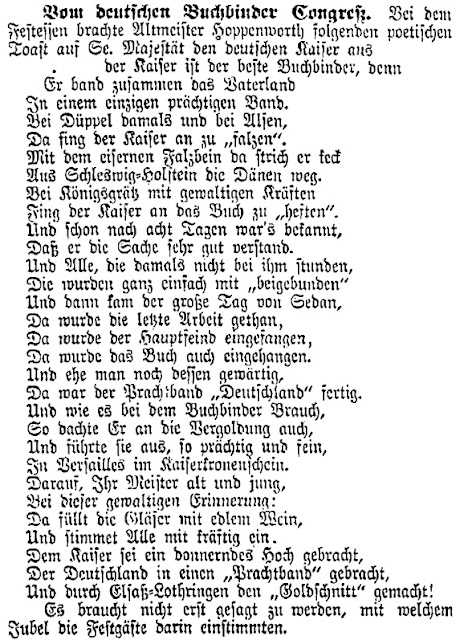 The Kaiser is the best bookbinder, because
He bound the fatherland together
Into a single glorious volume.
At Düppel, back in the day, and at Alsen,
That's where the Kaiser began his "folding."
With his folder of steel,
He stroked the Danes out of Schleswig-Holstein.
At Königsgrätz with mighty strength
The Kaiser began to "sew" the book.
And after only 8 days it was known,
that he understood what he was doing.
And all who didn't stand by his side,
They were simply "bound in."
And, then came the great day at Sedan,
That's when the last work was done,
That's where the principle enemy was captured,
And, that's where the book was cased-in.
And before one even noticed,
The deluxe binding Germany was completed.
And as is common with bookbinders,
He thought about the finishing,
And carried that out magnificently,
At Versailles, in the reflection of the imperial crown.
Therefore, you Masters old and young,
At the thought of this mighty memory:
Fill your glasses with noble wine,
And with mighty voices pronounce.
The Kaiser with a thunderous cheer,
He who bound Germany into a glorious volume
And with Alsace-Lorraine gave it a "gilt edge!"

It goes without saying that this pronouncement was heartily cheered by all the guests.

In 1936, the Allgemeiner Anzeiger für Buchbindereien (pg 341) republished this poem on the occasion of the 60th birthday of Bruno Müllers, director of the Fachschule (the trade school) of the bookbinding guild of Berlin. Mentioned were his grandfather Friedrich Wilhelm Hoppenworth and his Onkel Wilhelm Hoppenworth, the same who read the poem above, both very highly regarded Guild masters. Wilhelm and Georg Collin will likely also have been in attendance. 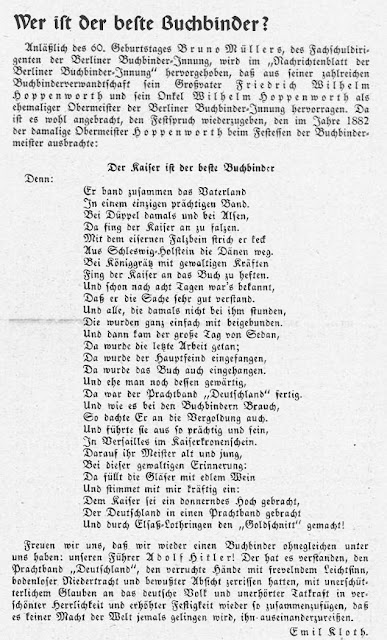 The times however had changed, and instead of a Kaiser and the Second German Empire (the first was the Holy Roman Empire) there was now the Third Reich, and "a new bookbinder, Adolf Hitler, who understood that the "binding" Germany needed to be restored after having been frivolously and maliciously torn apart... This new bookbinder, Hitler, made it his, and our task to restore this binding so that no power on earth will ever be able to tear it apart again..." This was written by Emil Kloth (link in German), a bookbinder, former marxist and labor organizer, who disillusioned by the collapse of the German Empire following WW I became a committed nationalist and Nazi functionary. He was also the author of Geschichte des deutschen Buchbinderverbandes published in two volumes by the Deutscher Buchbinderverband, Berlin 1910 – 1913. He is also the subject of the recently published Emil Kloth (1864 - 1943) : vom marxistischen Gewerkschaftsvorsitzenden zum bekennenden Nazi by Rüdiger Zimmermann

I have not found other politicizations of bookbinding in other countries, but with the election of the Nazis in 1933, the total political alignment (Gleichschaltung) of all trades, social organizations, ... began. This also carried over into design aesthetics for works produced by bookbinders, demonstrated by the works of Otto Dorfner, Heinrich Luers, Frieda Tiersch, Franz Weisse, among others, as well as their students. It was also clearly evident in the literature such as Der Buchbinderlehrling, the Allgemeiner Anzeiger für Buchbindereien, even the Jahrbuch der Einbandkunst. After the war, some of these continued working, and adapted to whatever political systems ruled where they lived. For Dorfner, who remained in East Germany (the DDR), this meant producing bindings extolling the virtues of that system and its leaders out of conviction, necessity, or just convenience... Both are topics for future posts.
Posted by Peter D. Verheyen at 1:44 PM No comments:


What do we see in this image? A small shoddy shop, dark, tired, with 5 workers. The "Meister" (an Omar Sharif lookalike as my wife pointed out) at left in the back. The curtains are drawn, and it is dark behind. The clock on the wall shows 7:00 a.m. or 7:00 pm - in February in Berlin it would have been dark at either time. A "calendar" on the wall at right given away by the board maker Th. Volstorf celebrates their 100th anniversary, 1930 - 1930. Below in that "calendar" it says February 28, then Dienstag (Tuesday). That would fit for 1928, a leap-year. In 1930 February 28th fell on a Friday. The date would also work for 1933. What does the "9" represent? The 9th week of that year, that would fit, buy why so prominent. Between the two a map of the center of Berlin.

The single workbench shows a number of piles and tasks. The young apprentice at left is slitting open signatures, another at right is sewing (with piles of signatures below). with the one behind checking the fit of the cover to the book. In the middle of the table we have a paste pot with heated glue pot behind. Gas for the heating flame (based on screw valve) comes from the pipe from above. In the pot, brushes with metal handles. On the wall at left, nicely ordered tools and a sign that proclaims Time is Money! The lights above, the reason for the image have been heavily retouched on the negative before printing.

[Edit 12/26/2015: The brushes are so-called Berliner or Leipziger Leimpinsel. See far right in image  below]

For some background, in 1928 OSRAM worked with the government of Berlin to hold a promotional week during which selected buildings would be spectacularly lit up.  OSRAM hired several photographers specializing in architecture to document these activities. During the 1930s efforts shifted to advertising lighting solutions for shop windows, advertising, and work/office/task environments among others. In order to help promote this, illustrated portfolios were created that representatives would have taken to prospective clients.

Below an advertising short Die Licht Bienalle, created by OSRAM in the early 1950s... The title says Bright as OSRAM Bright, Bright as a Bright Day.

Posted by Peter D. Verheyen at 2:02 PM No comments:

For a change, something from Germany's neighbor to the west, France. This is one of my favorite bindings, in large part because I have had the privilege of being able to view and handle it as part of my "day job" as a librarian. Reasons for its attraction are my love of art deco livres d'artistes, in particular the French bindings of that period, and the fact that so much of the process in the form of proofs of illustrations and the binding design are bound in. Johanna Drucker in her work The Century of Artists' Books , the livre d'artiste came into being as a publishing enterprise initiated by such figures as the Parisian art dealers Vollard and Kahnweiler who saw a business opportunity in marketing deluxe editions illustrated by recognized or upcoming stars in the fields of visual arts or poetry, among them Chagall, Picasso, Apollonaire, Matisse, Miro, Ernst.

The two short stories that are related in Two Tales by Oscar Wilde, The Happy Prince and The Nightingale and the Rose, involve the tragic deaths of a sparrow and a nightingale, each sacrificing itself for the cause of true love. The engraver and printer F. L. Schmied and the bookbinder Georges Cretté decided to use this emblem on the volume's magnificent art deco binding. Set into the morocco leather of the front cover is a panel with the image of a dying bird created with cracked eggshell and lacquer by Jean Dunand after Schmied's design. The edition was limited to twenty copies. The opening displays Schmied's dramatic typographical treatment complemented by a horizontal band of engraving and explains the death of the nightingale:


If you want a red rose," said the Tree, "you must build it out of music by moonlight, and stain it with your own heart's-blood. You must sing to me with your breast against a thorn. All night long you must sing to me, and the thorn must pierce your heart, and your lifeblood must flow into my veins, and become mine.

In addition to the final printed text and illustrations, proofs for all illustrations, borders, and other design elements were also bound into the book.

For more images of wonderful Art Deco livres d'artistes, including other examples of this edition see the auction catalog for the Bibliothèque Félix Marcilhac that can be downloaded in PDF. 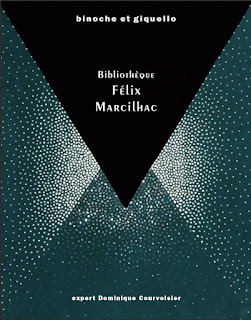 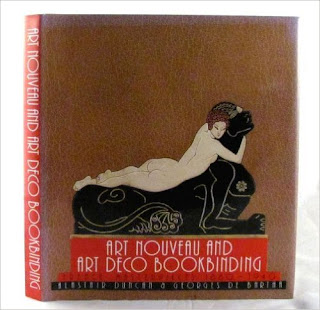