Paul Adam: An introduction to the German bookbinding trade, part I

While the trades were historically described in catechism-like works such as Friese's Ceremoniel der Buchbinder from 1712 (below), it wasn't until the turn of the 19th century for more complete and trade-oriented works to appear, works that laid out the history of the trade and its requirements in detail. 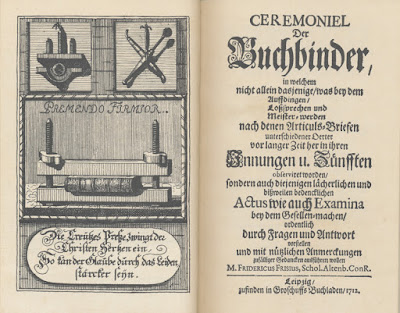 Paul Adam (1849-1931) was one of the leaders of the German bookbinding trade during the late 1800's until his death. He was the author of several seminal "modern" manuals written for the trade, among them Der Bucheinband: Seine Technik und seine Geschichte (1890), Die praktischen Arbeiten des Buchbinders (1898), also published in English as Practical Bookbinding by Scott, Greenwood & Co. (London) in 1903, Die Kunst des Entwerfens für zeichende Buchbinder (1917). All these works were reprinted numerous times and issued in various editions. Dates refer to the copies in my personal collection. His autobiography Lebenserinnerungen eines alten Kunstbuchbinders was published by the Meister der Einbandkunst's Verlag für Einbandkunst (Leipzig) in 1925.


Among these, Leitfaden für die Gesellen- und Meister-Prüfung im Buchbindergewerbe (1904) was the first modern text that set out to describe the trade for those who might enter it. It was published by Adam (founder and director of the state subsidized Technical School of Artistic and Practical Bookbinding in Düsseldorf*) for the Federation of German Bookbinding Guilds, one of the first of its kind. In over 130 pp it describes:

Also included were the required theoretical knowledge and hand skills for apprentices, journeymen and masters so that these would know what was expected as part of a nationally coordinated education and examinations process for the trades. These last sections were perhaps the most important as successful completion of the exams for the various levels would determine the career path of the individual.

Advertisements for many of the vendors of the time round out the volume.


In successive posts I will  describe some of these sections in greater detail as they would be very useful topics to cover in updated form by programs teaching bookbinding and the book arts (or most any craft) today. To help ensure at least a chance of success, crafts/tradespeople must not only understand their manual skills but also the fundamentals of calculating costs, accounting, and the other business aspects of what is a beautiful craft and trade.

Below are some of the other illustrations of this work depicting a great deal of Jugendstil charm.