Several years ago I was able to acquire the German Bookbinders' Guild membership book of a certain Ludwig Schaible. Herr Schaible was born on the 7th of January 1867 in Dornstetten, Germany and joined the Federation on the 1st of April, 1897 at the age of 30 in Leipzig, Dornstetten is in the northern part of the Black Forest closer to the Rhein whereas Leipzig is in Saxony, a bit south of Berlin, quite a distance apart and an indication of mobility in the trades.In this his third membership book, he is shown to have worked in Hamburg Altona from 1913 - 1918 as the location where these dues were paid was also recorded.

Now known as the Bund Deutscher Buchbinder Innnungen (BDBI) or Federation of German Bookbinding Guilds it was formed in 1880 to support the trade and those practicing it. The membership books were used in all trades and used to record the contributions made for dues, insurance, and other expenses related to working with these recorded using stamps. Below are the cover and a selection of page spreads depicting these stamps. 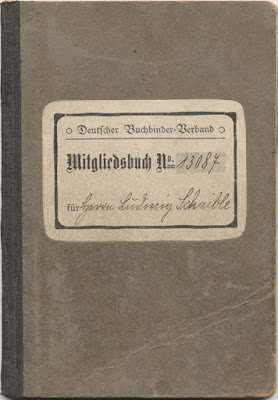 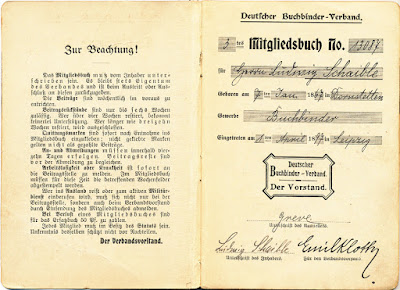 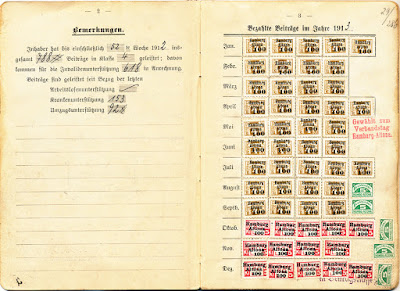 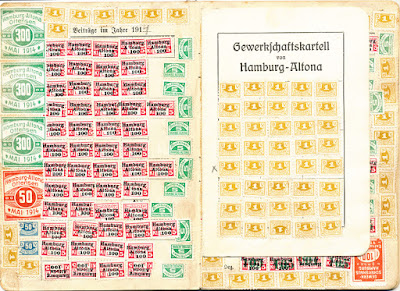 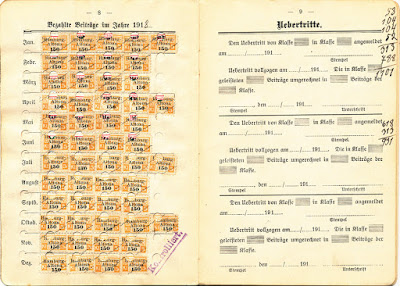 The small notice below from the Allgemeiner Anzeiger für Buchbindereien, Vol 22, 1907 also gives an indication of how these stamps were collected and accounted for. 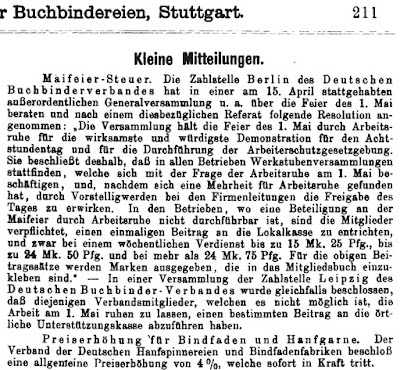 In this case for non-participation at the May Day celebration by those from shops that could not close for the day. Those earning 15 Marks/week were asked to pay 25 cents and for those earning over 24 Marks the fee was 75 cents. Stamps for the appropriate amount were then glued into the membership books. As an aside the notice also indicates that the Federation of German Hempspinners and Sewing Thread Manufacturers agreed to a general price increase of 4% for their products effective immediately.
Posted by Peter D. Verheyen at 8:31 PM

Email ThisBlogThis!Share to TwitterShare to FacebookShare to Pinterest
Labels: German Guilds, History of the Trade