Despite how easy it is to take pictures these days, Fritz Otto prefers black and white film. It's the tones and graininess he likes. Here we took some interior images of Buchbinderei before putting it back on the layout. The black and white images he took using a self-timer, though it was very hard to hold still for those 1-2 seconds.

All images shot on Ilford HP5 400 speed black and white film using a tripod and cable release for these 1-2 second average exposures. And no, I did not forget the Farbfilm. Lighting was provided by the cool white fluorescent in the task light visible in the first image below. 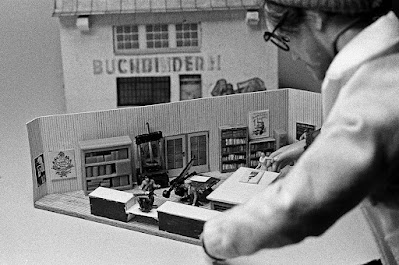