It's always wonderful when different parts of our lives and interests can intersect. In addition to bookbinding and conservation, model railroading has long been an interest and big part of my life, also in terms of basement square footage. 😏

In an earlier post, I described using photographic images to reinterpret an existing structure on my layout. At this stage almost all the structures on my layout are made from cardboard and paper including laser cut kits, but increasingly built from scratch by me using scraps from the bindery. In addition to the raw materials, there are also the skills of a binder that are widely applied, especially box making. After all, what is structure but an overly complicated box. You can read descriptions of some other similar projects on my main model railroad page. 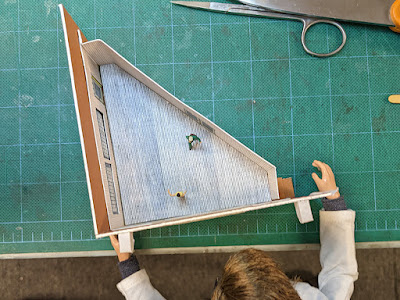 Still to be determined is the interior, but the space is framed out, walls up, ... Pics of that process here. Now comes the hard work of detailing the interior with shelves, benches, storage, a desk, stools, a board shear, presses... We'll see how I make it work, but in 1:87?!?! I'll figure something out.
Finally, another fun fact is that there are numerous bookbinders and practitioners of allied arts and crafts who are also ferroequinologists. Gary Frost, Bernie Vinzani, and Bob Hanmer come to mind. Know anyone else?
Posted by Peter D. Verheyen at 10:40 AM No comments:

Sometime late this summer while googling around aimlessly, I found a link to what was described as the deluxe edition of Ernst Collin's Pressbengel bound in full parchment. This was on my bucket list and given that it was limited to 30 copies bound in either full leather or parchment, the time it was published in, and the history of that time, including WW II, I felt it was nothing but a dream. The Heftlade the journal of the Jakob-Krause-Bundes published by Ernst Collin had an advertisement for the Pressbengel. A copy of the deluxe in leather is depicted in the Max Hettler collection collection in Stuttgart, the binding for both variants bound for the Euphorion Verlag by Hübel & Denck in Leipzig.


Below the pricing for the Pressbengel, leather or parchment for 85 Marks, paper for 4.50 Marks. This was during the period of hyper-inflation that started the end of 1922 and extended through 1923, so I will need to do some real math as hyperinflation currency was printed at ever greater denominations. A website that converts historical currency values calculated that 85 Mark (1922) has a value of $3931.93 current dollars, and 4.50 Mark (1922) $208.16 current dollars. Can that be right? More on hyper-inflation in my annual post from 2020.

Anyhow, back to the listing I found googling... I had not given myself a top-end budget for the deluxe, so ordered on the spot and had it arrive ca. 3 weeks later. Below pictures with some detail views that also raised questions...


Ernst Collin wrote an article about the publisher's bindings created for the Euphorion Verlag at Hübel & Denck in the Archiv für Buchgewerbe und Graphik, vol 58, 1921 (pp. 270-271). Pictures accompanying the article can be viewed here.


In the article, Collin wrote "that the bindings he viewed for the article were less than beautiful (wenig schön) but serviceable exemplars of what we would consider fine bindings... The bindings are stamped with Euphorion Verlag and Hübel & Denck Leipzig." Keeping in mind the exponential increase in luxury editions, Collin wrote that the owner of such an edition is [still] entitled to work that  represents the best in terms of craft and aesthetics, balanced against the cost pressures exerted on the publisher, and always bound by hand. Production of these bindings was managed by Heinrich Bahle who was a member of the Jakob-Krause-Bundes (precursor to the Meister der Einbandkunst). Collin notes that by indicating the relationship between publisher and binder that it was a joint effort. This also includes the effort that went into the work of the publisher, such as negotiating with the printer about type face and typography, something that is not always as perfect as it should be at the beginning of a relationship. Continuing, Collin notes that these bindings are created using classical tooling patterns and that the judgement of the expert bookbinder is critical, given that the publisher is not an expert in these areas. He closes with the remark that the illustrated bindings are representative of this collaboration, even if they can only give a weak impression of the beauty of the work. Taken together, Collin seems to be indicating that while a good start, the relationship and results of Euphorion and Hübel & Denck has room for improvement. Collin writing this article and then publishing his Pressbengel with the same publisher, a regular occurrence for him and others illustrates how tight-knit the bibliophilic fields were.

This was written a year before the Pressbengel was written and published. Examining my binding of the deluxe in parchment closely leaves me in agreement with some of Collin's sentiments in the article. I cannot tell whether the "sloppiness" where the doublure was trimmed and the staining and abrasion in the joint of same are the result of a repair or regular production, but the choice of very heavy paper, more like cover stock really, and other details lead me to believe the latter. Other factors include that the deluxe was likely bound on sale to the collectors preference and the overall impact of hyperinflation on labor, materials, moral, ... meaning that it may have been "good enough".

Posted by Peter D. Verheyen at 2:17 PM No comments:

Adding a Bindery to My Papphausen Train Layout

Back in 2014 I had shared images of what used to be a bindery located in an arcade under the Railroad and S[tadt]-Bahn tracks in Berlin. They weren't beautiful brick or stone arcades, but brutalist concrete on what is a kind of island between busy streets.

Yesterday, while surfing Google Maps I found that they had updated the images in that area, this time with an S-Bahn train overhead.

I think I will interpret that idea on my layout but opening a bindery in the lot below to the right of the gate and going back at an angle. The pigeon shack and BMW 2002s will need to be relocated...

The facade of the bindery I apprenticed in Gelsenkirchen could also easily be adapted to the lot, and I have views that I can use to create the interior details regardless the facade. Rather than running on top of the bindery, the mainline runs above.

Should be a fun and relatively easy project to distract me from the main project of redoing the area around the turntable, finishing the Schrebergärten next to Posten 210..., and real bookish projects.

I know this blog has been very quiet for the past month and a half, but after a very busy summer and early fall, I decided to take a break from the books and decompress with some training. The trains have been long neglected, in need of a deep dusting and cleaning, and most of all just wanted to be run again. Fritz Otto agreed, helped, and got in on the fun. In some respects it was a very "meta" experience. There are a lot of bookbinding skills applied throughout the layout, too, particularly box making, as most of the structures are made of card, some kits, but most built from scratch using photos as a basis with photo-realistic pattern sheets. 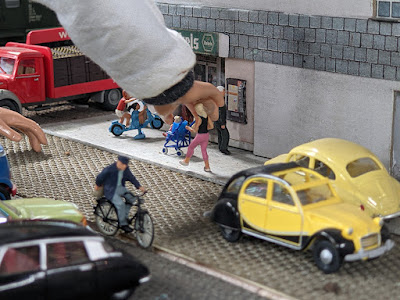 So, while dusting, cleaning, and running trains, I will be thinking of next steps on a few bookish projects. First and foremost turning the research from my Pappband/Ur-Bradel workshop that I taught for the University of Iowa Center for the Book into some form of article for somewhere. I also want to finish my German-language version of the fish skin articles. I also want to finish some binding projects and start new ones, in addition to continuing to share all my bibliophilic rabbit holes. Mind you though, all at a more relaxed pace with little to no pressure.

What would YOU be interested in learning more about from the German binding traditions?

Down The Rabbit Holes For The William Anthony Conservation Lecture Series

Join me as I jump into some of my addictive, all-consuming, and yet, sustaining rabbit holes in Down the Rabbit Hole: Embracing experience and serendipity in a life of research, binding practice, and publishing, part of the William Anthony Conservation Lecture Series.

The lecture will be at 6:00 CST on September 30, the workshop for students of the Center for the Book and staff of the Conservation and Collections Care Department  on the "Ur"-Bradel binding will be on October 1st and 2nd.

View the recording on the University of Iowa Libraries' YouTube Channel below or via this link. Lecture slides with notes can be downloaded here.


Below the adverts for the event. 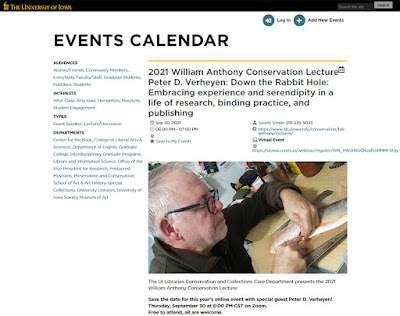 For more information on the lecture, see the William Anthony Conservation Lecture Series page at the University of Iowa Libraries, or the events calendar.

A post shared by University of Iowa Libraries (@uiowalibraries)

Hope to see some of you there.

Posted by Peter D. Verheyen at 9:46 AM No comments:

Back in November of 2017 I shared images of a new W. Collin binding I acquired of Goethe's Clavigo. Below, the dealer's description. The title page was by E.R. Weiß, han-colored prints by v. Seckendorf, and bound in full vellum in 1918. It warrants mentioning that W. Collin was the name of the firm of Court bookbinders started by W[ilhelm] Collin with his son Georg Collin his successor. More about them in this post from 2013. After Georg's death on December 24th, 1918, the firm was managed by his wife Regina and then daughter Gertrud.

After finding my binding by W. Collin of Adolf von Menzel depicted in a mongraph, I decided to look at the list of bindings entered into Deutsche Einbandkunst, the Jakob-Krause-Bund exhibit of 1921, the catalog for which was produced by Ernst Collin.

Georg Collin passed on December 24th, 1918. This was not the first copy of Clavigo bound at W. Collin. I introduced one published in 1774, and shared with me by a fellow collector on this blog in 2017. The designs are very similar, and the binding is not dated, none are.
I think I may have a one of Georg Collin's last bindings bound at W. Collin. Whether it is the one exhibited can't be determined without images, it may have been the one published in 1774, or even another. Sadly, I am not aware of any pictures of the exhibition, anywhere. Still, exciting to speculate it may be my binding.
Posted by Peter D. Verheyen at 12:31 PM No comments:

Just received Der Fachunterricht der schmückenden Berufe, Buchbinder (1927) by Beyer u. Weißenmüller. It was written to accompany the instruction apprentices would receive in trade school,  supplementing what they would learn in their binderies. This specific manual was written for those in more remote, less resource rich areas, away from the major urban centers.

The exercises in this little volume should be solved by you independently. Given your practical experiences and knowledge, this should not be difficult. The trade specific descriptions are there to supplement what you know, and serve as encouragement to continue on and experiment, even outside of school.