PROSPECTUS FOR
THE BOSS DOG PRESS LIMITED EDITION OF

Translation from the German and Introduction by
Peter D. Verheyen

Download the full prospectus in PDF form here,
write to the Boss Dog Press to request a printed copy,
or see the Press' site for more information. 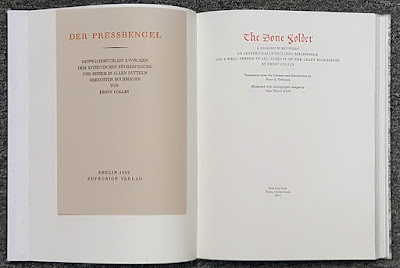 The Boss Dog Press is very pleased to present this prospectus for its most ambitious project to date: a handpress edition of Ernst Collin’s didactic dialogue about bookbinding entitled The Bone Folder. Originally published as Der Pressbengel in Berlin in 1922, it was first translated into English by Peter Verheyen beginning in 2008, and published in the Guild of Book Workers’ Journal in 2009. Peter later made it available online as a PDF through this Pressbengel Project blog.

Prior to its commitment to undertake the Bone Folder project, the Press had been granted access to a series of photographic negatives and contact sheets of the hand bookbinding process which had been taken in Germany in the late 1920’s or 1930’s. The photographer, Hans Schiff, fled Germany and spent the rest of his professional photographic career in New York City working as John Schiff. During discussions between Peter Verheyen and Don Rash about the design of this edition, the fact that the Schiff photographs were roughly contemporary in both time and location to the text led to the realization that they would be the perfect illustrations for the book. The Press is deeply indebted to Sibylle Fraser for allowing the use of these photographs.

These photographic images come from a collection of 34 negatives taken by Hans Schiff sometime after 1920, and document the pulling (taking apart) and rebinding a copy of the Bremer Presse Faust with that date on the spine.


An image was chosen to accompany each of the six days’ dialogues. The photographs do not necessarily relate directly to each daily subject; rather, they illuminate the progressive nature of the hand binding process. The images are presented at their original size of 110mm by 80mm and include the edges of the negatives. In addition to the six primary images there is a portrait of the young Hans Schiff. Unfortunately there do not seem to be any extant pictures of the author, Ernst Collin. The photograph used for this prospectus is an additional image not used in the book. The photographs have been scanned and digitally printed onto Canson Rag Photographique paper by Light Works, a non-profit photography organization based at Syracuse University.

About the Edition
As with the previous Boss Dog Press titles, The Bone Folder will be printed on our Morgans & Wilcox Washington handpress. The edition will consist of 120 copies, with 100 copies available for purchase. The paper for the book will be mouldmade Hahnemühle Biblio, chosen to show the digital Monotype Walbaum type to best advantage. Typesetting has been done here at the Press using Adobe InDesign, and plate processing will be provided by Boxcar Press of Syracuse, New York. The titling font is the second iteration of the Boss Dog Press FritzGotische, a fraktur face created by Don Rash in memory of the late Fritz Eberhardt, calligrapher and bookbinder extraordinaire. The page size is 9” x 12”, and echoes the 3:4 proportions of the seven tipped-in photographs. The frontispiece is a facsimile of the original 1922 Pressbengel title page, printed letterpress. This prospectus is presented in the same format and materials as the edition in order to give interested parties an idea of the look and feel of the finished books.


Prices and Ordering
Prices for The Bone Folder are as follows:

All books will be shipped via Priority Mail for $15. Standing order customers receive the usual 20% discount plus free shipping; dealers receive 30% discount. Orders may be made using the included order form; by emailing bossdogpress@donrashfinebookbinder.com; or by phoning 1-570- 239-8643. The Press accepts checks, credit cards and PayPal to bossdogpress@donrashfinebookbinder.com.


Download the full prospectus in PDF form here,
write to the Boss Dog Press to request a printed copy,
or see the Press' site for more information.