About a month ago I introduced Bärbel who had to leave school at the age of 13~14 following the death of her father, and go off to learn a trade so she could contribute to the household. Bärbel was the protagonist in Bärbels fröhliche Lehrzeit (Bärbel's Happy Apprenticeship) that I wrote about in Bookbinding as Chick Lit. This genre is known in German as Backfischromane, an interesting term. I had found the book by accident while surfing eBay... and ordered it on a whim, no researching the Author further in any detail. The story spoke for itself, and the illustrations were fun. After that post I received an email from a librarian colleague in Weimar who wrote to let me know that Felix Riemkasten had written an earlier version of the book in 1935... Well, now I was obligated to dig deeper if only to see what the differences were. After all, post-war Germany in 1953 was a very different time from Nazi Germany in 1935...

Babette bindet Bücher (Babette Binds Books) arrived early last week and provided a wonderful deja-vue experience. The 1953 story (Bärbel) was an almost identical word-for-word reprint with the same characters, but with a different illustrator (Lotte Oldenburg) than the 1935 story (Babette). Babette did however provide some differences that were interesting. The first was the choice of typeface in the 1935 story, an appropriately German fraktur. Makes for an interesting combination with the typefaces used on the cover... I did look through my Buchbinderlehrling to see if the book might have been reviewed or at least mentioned, but alas, no. Babette was described in Georg Ruppelt's Buchmenschen in Büchern (Book People in Books), 1997, accompanied by the frontispiece illustration.

Both books can be found via various online antiquarian platforms:


From the dedication below, I wonder if Lotti Kessler went on to become a bookbinder because of Babette's story...


The frontispiece and title page below show Babette in workshop with Meister Schwannecke and depict her as a the book-lover she is. 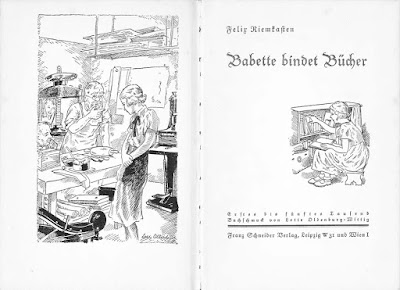 The 1953 story with Bärbel began with her being told by her mother that with the death of her father and the loss of income, that she would need to leave school to learn a trade and contribute to the household. We do not learn how the father died or other family details. These were, however, revealed in 1935's story about Babette... Babette's father was the local "city clerk" (Stadtsekretär, Beamter/Civil Servant) and went after his duties and responsibilities with great dedication. He was thinking of these on his way to hearth and home when he stepped into oncoming traffic on a slushy wintry day... He died instantly, a small consolation for his family... As the youngest of three she also had two brothers, one a student at university and the other a sailor. As a student, Babette was very bright and would certainly have followed her brother to a university - she wanted to become a teacher...

Babette's mother spoke strongly about these consequences and the impact that they would have. Babette answered with "jawohl" and "jawohl Mutter...," I.e. "yes, ma'am! A good obedient child who knows her duties and responsibilities. The story itself is told very unpolitically, although duty and obedience (Pflicht und Gehorsam) could be interpreted that way, and probably should be in the context of 1935 when everything was politicized, including trades and education.

After this the story continues identically with only very minor variations for both Babette and Bärbel.